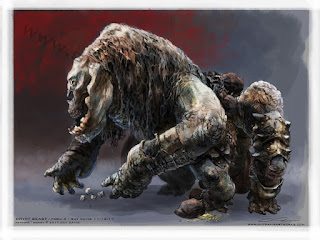 Jarreth gulped at the beast before him. He knew he shouldn’t have come this far into the caverns on his own, but it was no use berating himself over the choice now. He gripped his sword before him, settled into a wide stance, and stared directly up at the looming monster. It wasn’t that big. Merely twice his height. And it only had six arms. Or six legs? Jarreth couldn’t really tell. They seemed to all have hands on the end, but several were being used for standing on… And the creature’s skin probably wasn’t really made of stone or it wouldn’t be moving so easily, right?

The monster smiled. With its huge, protruding teeth, its smile wasn’t exactly comforting to Jarreth.

“Roll for initiative,” a voice called.

“What?” Jarreth blurted, his eyes flicking to the ceiling the voice seemed to come from.

The monster picked up one of the odd shaped rocks before him and gave it a toss. The rock had a lot of sides, each one with a number written on it. “Fifteen,” the creature said as the rock came to a rest. The monster then looked up at Jarreth like it expected him to do something interesting now.

Jarreth shifted. His arms were getting tired already.

The voice returned. “The human forfeits his right to roll. You go first, Hubert.”

“The human did what?” the human asked, but everyone ignored him.

“I swing my pitchfork in his direction,” the monster announced. He rolled the rock again. “Curses. Nat one.”

The ceiling laughed. “Okay. You swing your pitchfork at the human invader, but you hit the ceiling by accident. A chunk of rock breaks off and falls on your head. Roll a D8 for damages.”

“A D8? Sheesh.” The monster rolled a different rock and let out a relieved breath. “Two.” He picked up a piece of chalk and made a mark on the wall. I’m down to 20. Could have been worse.”

“I assume you’re going to battle him,” said the ceiling in a leading sort of way.

Jarreth took that to mean he should be taking action. Attacking made sense, so he took a swing at the beast.

“Hey!” The monster jerked back with a hiss and stared at the line of blood that bloomed on its arm. “You swung your sword at me! What the hell, man?”

“In D&D, dude!” The monster put another few feet between them. “What kind of asshole actually swings a literal sword? Did you even bring your dice?”

The monster gaped. “You went into a D&D dungeon without any dice? How do you expect to beat anyone without dice?”

Jarreth jiggled his sword around. “Well, I kind of thought I’d use this.”

“Dude!” The monster plopped down on its rump. “This isn’t that kind of dungeon. This is a D&D dungeon. Didn’t you see the sign at the entrance?”

“No?” Jarreth thought back to his entering the dungeon. “No signs… There was a painting of some kind of serpent.”

The monster sighed. “That was the D&D logo. You know, Dungeons and Dragons?”

“Never heard of it.” Jarreth finally allowed himself to lower his weapon. He didn’t seem to be in danger and his arms were seriously aching.

“It’s a game,” the monster explained. “It allows people to fight without getting hurt. Which is better for everyone, don’t you think? You can win without having to get buff enough to actually hold that sword properly. Or you can lose without actually dying. It’s pretty fantastic. You can take my treasure, or I can stop you, but either way, everyone gets to go home and no one has to bleed all over the place.”

“Huh…” Although he’d never heard of this, the idea was intriguing to Jarreth. It wasn’t like he enjoyed working out or having his skin pierced by things like pitchforks. And he was absolutely certain he wouldn’t enjoy dying. “And everyone abides by this?”

“Oh, yeah. If you don’t, the Dungeon Master will smite you.”

The voice from the ceiling popped back in. “You play by the rules or I kill you. Since you clearly didn’t know any of this, I’m giving you a pass on hurting poor Hubert here, but if you swing that stupid blade of yours around anymore, you’ll get a lightning bolt to the chest.”

Jarreth wasn’t altogether certain the disembodied voice could summon lightning, but figured it probably wasn’t worth taking a chance on. Instead, he slid his sword into its scabbard. “Sword’s going bye-bye.”

“Good,” said the voice. “Now… We’ll pretend you rolled what just happened. How bad’s your cut, Hubert? About a point of damage or is it worse?”

“I don’t think I’ll need a bandage or anything,” Hubert responded. “So certainly not worse than a point.”

“Okay. So you lose a hit point, but so does the human.”

“Because you strained a muscle. Moving on… Hubert?”

“I pick up the rock that fell on my head and try to bash him with it.” Hubert grinned and rolled a die. “Yes! Nineteen. I assume that hits?”

“Yeah, that hits. The human obviously has a low armor class. What the damage?”

“Okay. What are hit points?”

Somehow, Jarreth got the impression the disembodied voice was rolling its eyes. “Okay, we’ll say you had fifteen. Then you lost one to the strained muscle. And now six to being bashed with a rock. So you’re down to eight. You need to grab a copy of the Player’s Handbook before you come back. Now, what are you doing to do?”

“Stab my sword into his eye! The left one!” Jarreth felt clever for coming up with that.

“I don’t suppose you know your agility stat?”

“You would be right.”

The voice sighed. “Okay, well, as you can clearly see, he has tiny little eyes and the lighting in this room isn’t great and he’s a lot taller than you. So you’re pretty much going to need a nat twenty to do that, but go for it.”

Jarreth shook his head. “How? I mean, you told me not to really use my sword…”

“You roll,” said Hubert helpfully. He held out a twenty-sided die. “With this. You can borrow mine.”

“Thanks.” The die was larger than one made for a human would be, but Jarreth managed to toss it anyway. It tumbled a few times, then landed with a one pointing upwards. “One! That’s the best, right?”

Hubert gave him a pitying look as the voice asked, “Were you not paying attention earlier? Twenty is the best. One is the worst you can do. It’s so bad that you’re likely to hurt yourself failing. In fact, you just did. You rush toward Hubert, intent on spearing him in the eye, but you trip and fall onto your sword yourself. Roll for damage. Piercing with a sword is a D6.”

“Doesn’t matter,” said the voice. “I’ve realized he pierced his own eye instead of yours and the sword sliced right into his brain. He’s dead.”

“But!” Jarreth threw his hands up. “That’s not fair! I can’t be dead just because you said so.”

“Dude…” Hubert waved four of his hands around. “Drop it. Accept what the DM says and come back with a stronger character next time. Maybe a party. Definitely your own dice. Using your opponent's is bad luck.”

The lightning bolt that land right next to Jarreth’s foot got him to shut up. “Okay,” he squeaked. “I’m dead. I’ll leave.”

“Great!” said the voice, suddenly sounding friendly. “There’s a cute little shop in town called Leaves of Adventure. There’s a woman there named Amanda who can sell you all the stuff you need and get you up to speed on the rules.”

“Amanda’s great,” Hubert put in. “Tell her I said hi. I’d go with you, but the townsfolk tend to freak out when we dungeon dwellers show up on Main Street. And they don’t play the game out there, so people get hurt for real. It’s pretty sad. Not to mention barbaric.”

“Oh!” Hubert straightening in excitement. “And can you bring some ginger sparkle-sweet when you come back? And maybe some of those cherry sugar ropes they sell at the candy store down there?”

Hubert waved as Jarreth turned and left the dungeon. By the time he made it to the entrance, he had himself half convinced the whole thing had been a hallucination brought on by some kind of gas in the cavern system. But there it was, the painting on the rockface of what he now realized was a dragon twisted into an ampersand. And when he made it to town, there really was a place called Leaves of Adventure. A book in the window had the same picture as the cavern entrance and it was sitting beside a pile of wildly colored dice in a variety of shapes.

Not sure how his life had gotten to this strange spot, Jarreth nevertheless went into the shop and asked for Amanda.

The above image is by Guy Davis. More of Mr Davis's artwork is on his website at https://www.guydavisartworks.com/