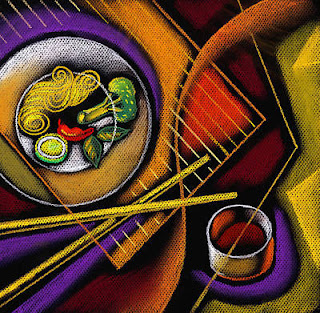 Terra Alexis Duncan sat by herself at Chang’s Famous Buffet. She had come here hoping for some interesting people-watching. Usually a mid-afternoon meal at Chang’s allowed her to view at least one elderly couple who would argue about whether the egg rolls were better here or at China Haven, discuss how the weather is crazier now than it ever has been, and maybe get into an argument about whether the news anchor on the TV in the corner needed to wear less makeup or not. This day there was no such couple, just a pair of dude-bros talking about the babes in their office building.

Dude-bros were moderately interesting to Terra Alexis, though less so than old people. Old people had strange opinions derived at from years of experiences foriegn to Terra Alexis’s own. Dude-bros, on the other hand, had strange opinions brought about by looking at the same world Terra Alexis was born into but with a perspective she was certain was flawed. It was odd that they seemed to believe every woman working into their company was put there to be judged by them, but it wasn’t odd in a fun way. It was more odd in an infuriating way that made Terra Alexis half-hope that the crab legs there were eating and she wasn’t would give them food poisoning. They didn’t seem to care that she could hear everything they were saying, though she had no idea if that was because they figured women’s opinions on their conversation were irrelevant, had deemed her too young to worry about, or just didn’t think geeky teenagers with ponytails and chunky glasses were worth noticing.

The news wasn’t any better. Even without sound, it was depressing. Someone had killed someone, which the analysts were likely saying was going to plunge the world into even greater violence. The leader of her country was possibly going to be removed from office, though probably not. Koalas were on fire in Australia because humans had super-heated the planet. And then the ad break commenced and she was told she needed to buy a new car right this second.

Terra Alexis sighed as she pulled out her phone and opened one of the more mindless games on it. With one hand, she shoved chow mein into her mouth with a pair of splintery chopsticks while the other drew lines through matching fuzzballs on the screen to remove them and rake up points.

When the door opened, Terra Alexis glanced up to see what looked like a third dude-bro. She assumed he was joining the others, so looked back to her phone. However, she looked up again when she noticed he was standing by her table.

He blinked at her and suddenly she realized this was no dude-bro. This wasn’t even a human. Human eyes blink up-and-down, but this person had just blinked side-to-side, like automatic doors opening and shutting at the grocery store.

Figuring a nonhuman at her table was more interesting than her game, Terra Alexis switched her phone screen off and gave the newcomer her full attention.

“Terra Alexis Duncan?” he asked, reading the name off of what looked like a standard seven inch tablet. The hand holding the tablet, Terra Alexis couldn’t fail to notice, had one less finger on it than humans typically possessed. The individual focused on her with an expression that clearly communicated he expected a quick confirmation and for the conversation to move on without her mentioning his obvious status as a nonhuman.

Being creeped out that he knew her name warred with Terra Alexis’s innate curiosity. She glanced around the restaurant. No one else seemed to notice the individual before her. Did that mean they wouldn’t notice if she started yelling for help? She wasn’t sure. “No?”

The individual blinked again. It was even weirder the second time as Terra Alexis realized he hadn’t blinked since that first time on arrival. It was a slow blink, a deliberate blink. His eyes dropped to the tablet and he pressed something on it. Then he looked back at her. “You are Terra Alexis Duncan of Greenrock Village. I am certain of this.”

Terra Alexis stares. Greenrock Village wasn’t the name of her town but of her subdivision. Knowing her address wouldn’t tell you she lived there unless you actually knew the neighborhood. “Who are you?” she asked.

“Vancouver, Canada,” he responded in a flat tone.

Somehow Terra Alexis failed to believe either that he was named Bob or that he came from anywhere in British Columbia, let alone Vancouver. “If I tell you that I actually am Terra Alexis Duncan, will you tell me who you actually are?”

The individual gave a nod that sent some of his blond hair flopping into his face. As he moved brushed the hair back into place, he added the word, “Yes.”

“Alright then.” Terra Alexis leaned back in her chair. “I am Terra Alexis Duncan of Greenrock Village. Have a seat and tell me who the heck you are.”

Complying, the nonhuman pulled out a chair and sat down in it. “I’m Ernafhero Eakreian Zhoeho. Please call me Erna. I’m from a planet called Eenren. And I’m here to offer you the chance to save your homeworld.”

Well, that was interesting. Terra Alexis tilted her head to the side as she studied the alien. He blinked at her for what was only the third time and she wondered if blinking conveyed something in his culture or if maybe he only needed to do it once a minute or so. She then wondered if she was using the correct pronoun. Yes, the alien looked like a dude-bro, but maybe all the women on Eenren did. “Are you a male or a female alien, Erna?” she asked.

Erna stiffened, making Terra Alexis realize that probably hadn’t been the most polite way to phrase what she had just asked. She rushed to rephrase. “I mean, which pronouns do you prefer? He/him? She/her?”

Terra Alexis smiled a little. “Most people don’t like that one. Most non-binary people tend to like something like ‘they’ or a new word like ‘zhe’ rather than being ‘it’. ‘It’ has a connotation of being a thing, and people don’t like being things.”

“I’m not people,” Erna responded. “At least not human people. Also, I feel I should point out that your planet is going to be destroyed in ten minutes if you don’t agree to come with me before then, so you may want to hurry things along.”

“Oh?” Terra Alexis raised her eyebrows. “Why is my planet going to be destroyed?”

Erna blinked a fourth time. “Because my superiors will destroy it. With a big gun, like in that movie series you have about the political insurrections in space.”

It shrugged. “Maybe? I don’t remember. It’s very long though.”

Nodding, Terra Alexis said, “Yeah, sounds like Star Wars…” Leaning forward on her elbows, she thought for a moment before going on. “So, just to be clear… An alien spaceship somewhat akin to the Death Star will destroy my planet ten minutes from now unless I agree to be kidnapped by you?”

“It’s not a kidnapping. You have been named Champion of Earth. When you agree to accept the title, you will be escorted my homeworld, where you will be trained to battle against the representatives of seven other worlds for the right for your planet to enter the Galactic Union. Three of you will succeed. The other five will, sadly, see their planets destroyed.”

Erna waved its hand through the hair like this question was inconsequential. “A series of events that will include both challenges of physical and mental might.”

“Okay…” Terra Alexis nibbled her lip as she thought about this. “Why me? I’m not a warrior.”

“I see. So I’ll be battling against someone who’s name means Mars Defending Soldier or something?”

Erna shook its head. “No. There are no intelligent beings on Mars.”

Terra Alexis gave him a flat look. “Is everyone from your planet as much of a smart ass as you?”

“Yes.” Erna’s lips ticked up in a smile.

Against her better judgement, Terra Alexis found herself almost liking this alien. Still, she didn’t think she liked it enough to leave the planet with it. “Then I don’t think I want to go there.”

Erna’s smile dropped. “You have to. If you don’t, then Earth will be destroyed.”

Terra Alexis shrugged. “Sounds to me like if everyone in your little game is evenly matched, then Earth would still have a five in eight shot at getting destroyed anyway. And what are the odds that we’re evenly matched? I’m seventeen, untrained, and weigh all of one hundred and five pounds. Are other species really pathetic enough that I have a chance at beating them in physical combat? Are they houseplants, maybe?”

“You would be the smallest contestant this cycle,” Erna admitted. “But there will be training. And also, you are the most intelligent of the contestants judging by what I've seen thus far.”

That provoked a snort. “If humans are the smartest people out there, then the universe is royally hosed, dude.”

“But Earth would not be.”

Thinking about this, Terra Alexis allowed her eyes to drift to the TV. If it hadn’t been there, who knows what conclusion she would have drawn. But it was there, showing her images of a building that was fine yesterday but was now rubble. A lot of people would have seen that and thought they didn’t want their planet to likewise be destroyed. But not Terra Alexis. “I don’t think so,” she said. “I’m not going.”

Erna blinked. “You can’t be serious.”

“I am.” Terra Alexis stood up. “I’m not going to spend my last months torturing myself to learn how to fight for people who don’t deserve it. Let one of the the other planets live instead. I’m going to hit the dessert bar. The coconut pudding here is excellent and I'm down to something like five minutes to enjoy it in.”

As it stared at the human girl walking up to the buffet's selection of sweets, Erna couldn’t help but feel it could have done a better job at picking a representative for Earth. Then it glanced at the TV and wondered if maybe the entire species was selfish enough that it really couldn’t have done better.

With a final blink of its eyes, Erna stood up, loaded the app that would summon a transport beam, and returned to his office to file a report explaining to its superiors why there would only be seven planets in this cycle’s games.

The above image is Chinese Food by Leon Zernitsky. You can order a print of it on Fine Art America.

The story was prompted by a text conversation with my teenaged son. He had gone to a Chinese buffet by himself and was reading the news while listening to some dude-bro types. I texted him back that according to the Hero's Journey he was about to get a Call to Action. He responded that I could use the situation as a writing prompt.