Her minions laughed like this was somehow witty. It wasn't. Someone said something nearly identical every single time I walked into the cafeteria. And usually it was Goldie Locks there. (Who may have been born with an alignment to Good, but who was downright rotten in spirit, thus proving that good and evil aren't quite as important as they're reported to be.)

This time was a little different though. This time instead of everyone snickering and someone pretending to smell wet dog, a voice from directly over Goldie's shoulder tossed out something I'd never heard before. “Yeah,” he said. “Something wicked awesome!”

As a group, the student body turned to stare at the new kid. He's just gotten in this morning and nobody knew much about him other than the basic stats. Name: Rhett Hoodson. Attractiveness: High. Height: Even higher. The rest was a bunch of unknowns. Heritage: Unknown. Powers: Unknown. Alignment: Unknown.

Goldie herself had been flirting with him every time I'd noticed them in the halls together, but now her nose crinkled up. She turned to her minions, who all mimicked the sneer. “I guess someone has a taste for bestiality.”

The entourage smirked like this was a new cut and not something uttered any time a guy said more than two words to me. Like my furry tail and tufted ears overrode my humanoid everything else.

New Boy gave a truly wicked grin. “Oh, I don't. Which is why I'm afraid I have to decline your invitation to sit at your table.”

Oh, wow. Mama would love this guy. Which, of course, meant I needed to steer way clear of him if I was going to have any hope at all of graduating with a Neutral designator and making it into Happily U rather than being delegated to a random community college of Evil.

But when he turned that grin my way... Well, I was certain that while I might be the big bad wolf-girl, this boy was the one who spelled trouble. But I followed him anyway.
Posted by Andy Brokaw at 5:40 PM No comments:

Nathaniel pulled a shiny silver spoon out of his bag after sitting on my living room sofa. “What's this?”

I raised an eyebrow at my instructor. “You're kidding right?”

But of course he wasn't. That would require a sense of humor.

Gah. The old and wise guro thing that had been done to death in movies decades ago didn't suite Nat at all. For one thing, he was barely out of college. For another, his jet-black skin had almost as many piercings as pores. And, probably worst of all, he wore a cowboy hat. All the time. In Boston.

“Okay, maybe it's an object you've glamored to look like a spoon.”

My eye-rolling was entirely automatic. Mom was constantly telling me to lay off the motion, but I didn't see how anyone could possibly refrain in my position.

He rolled his eyes back. “You're supposed to prove it. Without magic.”

“You're my magic tutor,” I pointed out.

“Yeah. And I'm trying to teach you something. How can you tell this is enchanted?”

I shrugged, something else Mom bugs me about doing too much. “Touch it?”

Most glamors are completely vision-based tricks and can't stand up to touch. Everyone that.

Obviously, I could reach it. Nathaniel looked tough, but he worked for my mother, who was easily the most bad-ass witch in New England, so he wouldn't hurt a hair on my pretty blond head if I tried to take it. “Whatever. I don't know.”

He held it up in the shaft of sunlight piercing the window until its shadow fell on the coffee table between us. Its decisively fork-shaped shadow. “Illusions fool eyes, but not the sun.”

Okay, that was worth knowing. Still, I was going to say something scathingly sarcastic until a little voice in the corner of my mind screamed at me to look down.

My eyes drifted to the floor and I started to laugh.

Turned out, Nathaniel did have a sense of humor. Though maybe a slightly twisted one. Because his shadow wasn't wearing a cowboy hat. His horns would have pierced it. 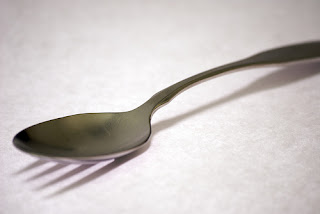