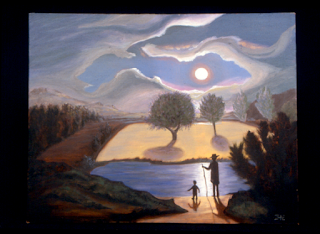 “This is it,” the old man said. “The place where you came from.”

The being at his side could be mistaken for a human child from a distance, but not from up close. Up close you see the proportions are ever-so-slightly off, and more importantly, you see the golden scales. The creature stares down into the water with a skeptical expression on his uncanny face. “I’m a fish?”

“Not exactly,” says the man. “You were born of a wish, as I have heard your mother tell you often. A dragon appeared in this very lake and told your mother it would give her whatever her heart most desired. And she told it she wanted a child.”

“She wished for me,” the creature repeats softly. “She could have had anything, but she asked for me.”

“She did,” the old man confirms. “Your mother loved you so very much. Even though… Well, you know you’re not like the other children.”

The creature’s mouth tries to imitate a smile with muscles that weren’t designed for smiling. “Because I’m barely three feet tall after thirteen years or because I’m covered with scales. Oh! Or is it because I prefer to eat live mice rather than candy?”

“None of these things are standard,” the old man responds with a wry look. “The dragon got the basics right, but made a human-shaped dragon rather than a human child.”

The creature nods. “But Mother loved me anyway.”

The old man lets out a weary breath. “I tried. But in the end, it was her love for you that killed my wife. That is hard to forgive, even though I know she would want me to.”

“I didn’t mean to kill her. I didn’t know I could create fire.”

“I know.” The man puts his hand on the creature’s shoulder. “I don’t hate you for it. I just can’t love you just now.”

The creature shifts away beyond the man’s fingers. “So you’re returning me.”

His eyes close for a long moment before the man responds. “That was my wish of the dragon. That we be allowed to bring you back should taking you prove a mistake. That the dragon would continue raising you if we could not.” His shoulders shake as he struggles to hold back tears. “Your mother called it a monsterous wish. She said she would never abandon you. And she never did.”

The creature sits, staring at the water that ripples in a light breeze. “But you’re going to.”

“I think it will be better for you to be with the dragon.” The man’s hand moves towards the creature’s head, but falls without touching it. “When people learn what happened to your mother, I won’t be able to keep you safe. She would want you safe.”

They sit in silence, watching the full moon climb in the sky. When its reflection reaches the lake, they’ll be able to call the dragon that lives beneath the surface. Neither of them can think of anything else to say, so they wait in silence.

When at last the glowing circle appears on the lake, the man pulls out an acarina and plays a little tune. It’s not one the creature has heard before, but it moves into him like a familiar lullaby. It relaxes his body into calm even as the water starts to move like something massive is sailing through it.

Two hills appear on the lake, and when they continue to rise it becomes obvious that they are eyes residing on the head of a massive serpentine dragon. Its whole head appears, then a long swatch of neck. A line of coppery fur runs down its spine but the rest of what is visible is covered in scales much like the creature’s. Tendrils waves from the side of its face, almost like whiskers. It’s reptilian expression is impossible for a human to read.

“You have returned,” the dragon says. Its voice sounds like time itself, ancient but still vibrantly relevant.

“I have,” says the man. “My wife, she is gone now. And my fellow humans will blame the child for her death. I don’t think he is safe with me.”

A puff of mists emerges from the dragon’s snout as it snorts. “Is this how you justify abandoning that which you were sworn to love and nurture? How very human of you to say it is for the child’s own good.”

The man shakes his head. “He has been loved and nurtured. But my kind will label him monster and hunt him to his death.”

The dragon stares down at the man until the man drops his gaze, tears falling from his eyes in his shame. Because the dragon is right; he is not returning the creature just to keep his child safe. He is doing it because he doesn’t really see his child when he looks at the creature he has raised.

The huge eyes of the dragon shift to the creature. “I shall rename you,” it says. “You are now Yyshell. It means a gift returned.”

The creature doesn’t protest the cruelty of the name. How can he when it’s so accurate? Rather he nods his acceptance.

“If you accept this,” the dragon says, “then step into the water and you will become dragon.”

He doesn’t want to. He wants to turn and run home to his mother’s embrace. But his mother isn’t at home. He’s had his last of her tender hugs and there is nothing else left in their cottage for him.

Yyshell steps forward. He begins to tingle when his toes touch the coldness of the lake, but he keeps going. The water rises above his thighs, then above his waist. He pauses when it is at his shoulders.

“Keep going,” says the dragon, sounding kind now. “You will not perish. I promise this, and a dragon’s promise cannot be broken.”

It takes all of the courage in his young heart, but Yyshell keeps going.

Despite the dragon’s testimony, Yyshell isn’t sure he won’t die as the water closes over his head, but he lets it happen all the same.

A light bursts through the dark and the tingling in Yyshell’s skin becomes a fast burn. He can feel his human form dissolving in the heat. It hurts and he screams, allowing cold water into his lungs, which burst as the chill hits them.

The agony is over within heartbeats, leaving a throbbing ache in Yyshell’s new body. No longer does he stand on his legs. Instead, his belly rests in the mud, four flippers flopping to its sides. A tail like a mermaids trails far behind his enlarged head. He moves an arm that is no longer an arm, but now a long appendage ending in a webbed claw, and stares at his new “hand.”

On shore, the man gawks. Part of him is appalled at how much better the new form fits the creature he raised than the mockery of human shape it used to take. Part of him is relieved that this is no longer his problem.

“Thank you,” he says to the older, larger dragon. “I leave him in your care.”

For a moment, the elder dragon ignores him, focusing instead on the youngling. Now that he is in dragon form, Yyshell sees that his elder is female and that her lifeless expression is actually one of compassion and empathy. She bumps her forehead gently against his with an affection he recognizes from his human mother even though it is not a gesture the woman ever used.

The old man has already turned and is making his way back toward the path to his home. He doesn’t see the elder dragon gather herself before her head lashes out to throw her jaws around him. She doesn’t eat the man. She simply snaps him in half and then drops the pieces on the ground.

Yyshell stares. “You killed him,” he says in a numb voice.

“Yes.” The dragon returns her head to the Yysell’s level. “For now you will know there is no return to the human world for you. It is for the best.”

“There was no return anyway,” Yyshell responds. But he’s not angry. The old man had loved his human mother, but he had not treated her as Yyshell had wished. He had yelled, made demands, and failed to heed any of her wishes, from where to holiday to the color to paint the shutters. The number of times the man had driven Mother to sobbing tears was something her child had lost count of. In truth, Yyshell had never harmed the man more out of sentimental recognition that his mother cared for him than for any reason relating to himself. As his mother no longer cares if the man lives or dies, neither does Yyshell.

“I will not call you Mother, though.” Yyshell tests out his flippers, trying to move into deeper water. “I had a mother.”

“You did.” The elder dragon waits patiently, letting Yyshell learn on his own how to do things most dragons learn while freshly hatched. “I am not her replacement. I cannot be, for I am not human. You may call me Isshiah. It means teacher, or guide. For I am here to help you learn how to be your true self.”

Yyshell succeeds in pushing himself along the mud far enough that a layer of water slides under his rearmost flippers. From there it is easy work to get his entire body to a point of flotation. He backs a little further, then turns and tries to swim forward. It doesn’t work on the first attempt, or even the second, but the third sends him gliding through the water in the right direction. He leans a little too far to the left, but he’s getting there.

She swims around Yyshell in one graceful motion that he despairs of ever being able to mimic. One of the whisker-like tendrils on her head reaches out toward the child, who fumbles to mirror the gesture. Isshiah wraps her appendage around his and he falls into a dream.

When Yyshell awakens, he holds the dragon language in his mind.

“That is a good start for today,” Isshiah tells him in his new tongue, one which works far better under water and with dragons throats than human speech does. “If you learn too much too quickly, it will cause harm.”

She turns in the direction of the center lake. “But I am afraid you must practice your movements. We have only as long as it takes the moon to cross the water to reach our home or we will be locked out of it until tomorrow night.” She makes a grating gurgling sound that would have frightened a human but which Yyshell knows is a laugh. “But it is the first night of the full moon, so if we do not make it tonight, we have two more to try on.”

Yyshell sighs through his new gills, a little proud of himself for figuring out how to do that, and starts the long swim to his new home.

The above image is by Mark Zane and can be found at the Art Center of Yates County.
Posted by Andy Brokaw at 1:20 PM No comments: