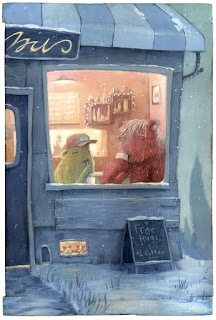 Marsh knows Sheelia wants him to ask about her trip to Hawaii. The hat on her pretty green head proclaims as much. (Well, actually, it says, “Aloha,” but that’s a clear introduction to conversation about the vacation.) He’s determined not to do it though, because talking about Sheelia’s trip would mean talking about Dylan.

It would be easy to dismiss Marsh’s dislike of Dylan as jealousy, but it isn’t. When the shaggy red guy claims that Sheelia is like a sister to him, he’s actually telling the truth. But Dylan has always rubbed Marsh wrong. And it’s not hard to see why. I mean, really, what kind of monster takes his girlfriend to Hawaii? The furless kind, that’s who. The kind who never stops to think that maybe a tropical climate isn’t the best place for someone who walks around covered in thick hair to vacation and that maybe she would be happier with a trip to Iceland. Because with Dylan, everything is always about what’s best for him personally, and Sheelia’s just along for the ride.

Of course, if Marsh said any of this, Sheelia would tell him he’s being unfair. Dylan’s not just furless; he’s a reptile. That he manages to survive winters in Minnesota is amazing and one can hardly expect him to to travel to places just as bad for his circulation.

So the pair sit looking out the window of Cafe All Souls sipping their drinks in silence as they watch the falling snow.

Belmont and Jinx sit under them in the lower level of the cafe, likewise quiet. If they were talking, there would be discussion of Jinx’s date last night, which Belmont knows she wants to talk about. He doesn’t though. You see, when he tells you Jinx is like a sister to him, he’s lying about it. But unfortunately for him, she classed him as family months ago, which is like years when you’re a mouse.

So both pairs sit with much to talk about but no words spoken. And I, their faithful server, keep the drinks flowing and stick my nose into the business of neither mice nor monsters.

Above artwork is "Warm and Fuzzy" by Mateo Dineen. This piece and others can be seen on the artist's website at https://www.mateo-art.com/ .

It was given as a prompt by Wording Wednesday. You can find the original post and other writer's responses at https://wordingwednesday.blogspot.com/2019/09/s3w1-creature-is-warm-and-fuzzy-monster.html
Posted by Andy Brokaw at 2:00 PM 1 comment: