Like every year, the town gathered to celebrate the end of winter. Most years, the festivities took place amongst flowers and under a canopy of new green leaves, but this year spring was reluctant to get truly started and although the snow had melted and left a carpet of grass, the trees stood bare.

Kelsey preferred it that way. She liked how their skeletal limbs stretched out to the sky and the creepy shadows they cast across the world after the sun set, which was the only time Kelsey ever went out. Trees with leaves on them made her sad in a way she could never explain to those who noticed. Not that many people did.

By the time she made it to the party, half the celebrants had gone home and as many had spread into the wooded areas of the park as remained in the well-lit stretch between the bandstand and the food vendors. She gave thanks to the shortening of the lines as she waited behind only one couple for her last funnel cake of the year, then walked with it to the edge of the gathering.

A band strolled on stage to scattered and unenthusiastic applause. The popular entertainers had been booked earlier in the day. It was something the organizers did every year, even though people always pointed out that folks would be more likely to stay if they did it the other way around. Kelsey suspected this was because the organizers liked to be home before dark. Not being a big fan of country cover bands, which is all they ever seemed to book in any time slot, Kelsey didn't really care.

She licked the last of the powdered sugar from her fingers as she wove her way into the trees. Owen Banks snored against an elm, sleeping off too much beer, and Kelsey stopped for a moment to make sure he was comfortable and not in danger. “May your hangover be merciful,” she whispered as she moved on.

She gave wide berth to Stella McCall, who was making out with Timothy Learborn exactly one tree away from the one Clive Daniels had carved with their initials the spring before. She ran her fingers over the markings, knowing Clive wasn't over Stella yet, and whispered a little blessing to help him heal.

A fawn rustled in the grass down near the stream and Kelsey regarded it with a sigh. “There was no hope you'd skip this year, was there?”

The stream gargled with the increased water snow melt brought as the fawn settled down to lie beside it. She regarded Kelsey with pity, but made no sign of leaving. She never did.

Kelsey's eyes drifted closed and she took a deep breath of wood-scented air. It struck her all of a sudden that she should have had a milkshake, but it was too late now.

The stars burst into flames and orbs of light pulsed down from the moon. Kelsey didn't have to see them to know. She'd been going through this for almost longer than she could remember. She held out her arms and allowed the magic to flow into her body. It was the exchange she'd agreed to many springs ago, half the year spent in the wild in exchange for the powers that let her guard her ever-expanding family. She lowered her body to the ground as her form began to change.

When the tingling faded, she opened her eyes again. A woman stood across from her, her eyes the same soft brown as the fawn's. The same soft brown as Kelsey's, whose name the woman would now assume. The woman gave Kelsey a sad smile. Kelsey bowed her head in acknowledgment, straightened her four legs, and bounded away until fall. 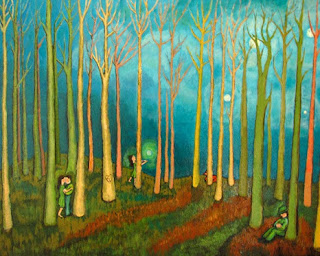 This story was written in response to this image by Janeane Wilbur, which was used as a visual prompt on G+'s Writer's Discussion Group.

Posted by Andy Brokaw at 8:01 AM No comments: