This Job's for the Fish

Eeareea smacked her tail against the rock she sat upon. That was the third human to pass by today without so much as glancing her way. What good was it to lounge around seductively topless if no one noticed?
Things had been so much easier back in her grandmother's day, before the invention of those blasted motors that made a sailor deaf to everything outside his boat.
A jet ski poked its nose around the corner of the cove, but Eeareea wasn't even tempted to go after it. She had a cousin who'd spent months in intensive care after trying to get someone off one those monsters.
She may just have to be under-quota this week. It wasn't like she wouldn't be able to make up the slack next week, when the spring break college crowd started showing up. Oh, yes, the time of drunken frat boys hanging off the sides of sailboats and virtually begging to be caught was nearly upon them!
Of course, pointing that out to Aalye wouldn't get her anywhere.
Sometimes thinking about her boss made her think that it wouldn't be so bad if one day she were the one to get caught. Living life in some human aquarium probably wouldn't be that bad. She had a dolphin friend whose sister was in Tampa and quite happy. All the humans seemed to expect from her was a small amount of gymnastics and in return they gave her a predator-free climate-controlled pool with all the fish she wanted. Really not bad at all. Not at all like the horror stories they told kids to scare them away from shore.
The sun was harsh today and Eeareea needed to get back underwater soon if she wasn't going to burn. It would be bad enough to go home without a catch, but going home with her skin bright red and ready to fall off would be even worse.
She was just about to dip under the the waves when she heard the sound of a lone human hiking over the rocks behind her. Finally a spot of luck!
She turned to smile her most dazzling smile at the young man, who stood gaping at her like... Well, like he was looking at a mythical being. It was a similar expression to the one most humans wore when seeing a mermaid, though not as filled with longing as she'd hoped.
Then the human held out his hand behind him. “Honey, you have to come see this!”
As another human male clambered into view to take his boyfriend's outstretched hand, Eeareea threw her head back and flopped into the water. Didn't that frigging figure?
Maybe she'd stop by the career center on her way home. Sirening just wasn't what it used to be. 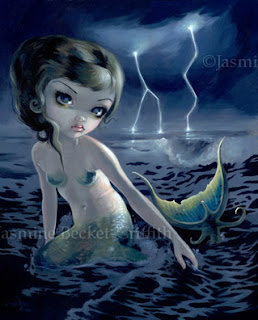 Image is a piece called Storm Chaser by the lovely and talented Jasmine Beckett-Griffith and prints are available for sale on her website (http://www.strangeling.com).
Prompt for the story came from this random art generator and was to demonstrate a sense of anxiety with a mermaid. I think I was supposed to paint it, but I'm better with words than brush strokes. :)

Posted by Andy Brokaw at 4:53 PM No comments:

Chronos, what year was this anyway? Sometime after trains, but before air conditioning. So... Twentieth Century somewhere? Sometimes Celia really regretted not paying more attention in history class. If she'd known back in school that she'd be stuck paying off the student loans on her Chronological Engineering degree delivering dumplings to Time Travelers with the munchies, she would have.

It wouldn't be so bad if she was at least in Coordination, making sure the machines were properly calibrated and would dump you in the right time and place, rather than on the other side of the planet during the wrong war, as had happened to many an early Traveler. She was still at least two years and three promotions from that though, and for now her job consisted entirely of stepping through portals to strange places with weird smells. And never anywhere she'd want to go, of course, because all of those time periods occurred after the invention of fast food delivery and very few people were stupid enough to pay Speedy Snacks' delivery fees when there were local alternatives.

At least this drop-off wasn't in the Middle Ages. She'd been back and forth from there all week and her hair absolutely reeked of the time period when she got home every night.

Dripping sweat, she followed the directions of her customer-locater app across a train platform and up a small set of stairs that looks to be made out of pure rust. Why in time would anyone vacation here?

It took a few moments to spot her target, but once she did there was no mistaking the couple. They were the only people on the train with white sneakers and top hats. Bloody tourists.

Celia handed them their order and shifted from foot to foot waiting for payment. Outside the train, people were rushing around and Celia had a bad feeling about the whistles that were being blown.

“What? You said you had enough.”

The train made an ominous creaking sound and yet more whistles sounded.

Celia shook her head. “No. You can send credit through your phone though.”

The train shuddered and started ever so slowly to move.

Ugh. Celia was going to be stuck on the thing, speeding away from her portal home. It was a million degrees here and she was supposed to get off in half an hour!

She grabbed the money the woman was holding in her hand. “I've got ten I'll spot you. Have a good trip!”

She took a running leap, landing on the platform just as the end of the train car accelerated past it. 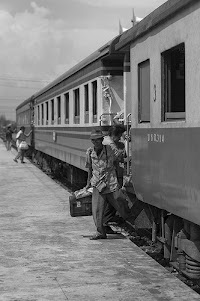 Prompt taken from The Flash Fiction Project on G+.

Posted by Andy Brokaw at 2:23 PM No comments:

Email ThisBlogThis!Share to TwitterShare to FacebookShare to Pinterest
Labels: sci-fi

The Shepherdess and the Ghost

The ball sailed through a gap in the balcony rail and Trey said a word his mother wouldn't approve of. Well, that was that. The ball was in the Undercity now and Trey would never see it again.

Veronica saw the ball crash down from the pristine world lurking above her own. She nudged her cousins and they rushed over to hunt for it in the field of rubbish. An undamaged Uppercity object could be worth some serious money.

The others searched for the ball, but Nica was distracted by a swirl of magic coming from a spot under the nearest Uppercity bridge. Her oldest cousin swatted her shoulder and told her to pay attention, but she ignored him to follow her new lead.

A wooden stirrer lay half-burried beneath a broken doll. It hummed with energy as Nica grabbed it and a vortex of water began to swirl above it.

Shocked, Nica dropped the stirrer and stumbled backwards. Her leg caught on a rusty support beam, opening a gash on her calf. But she felt no pain because she was too busy being stunned by the wet water genie bowing before her.

The genie smiled. “What is your wish?”

This is in response Rachel Harrie's Second Campaigner Challenge of her fourth campaign. The exact prompt was kinda long, so check it out there if you're curious. :) It involved four unconnected images (the above being my favorite) and a brief written description of a situation.
Posted by Andy Brokaw at 2:26 PM 13 comments: