“Uh-oh.” Char stared at the cracked stone. He hadn't meant to break it, just to grab the worm crawling across it.

“Charlemagne Ezekiel Finch!” His mother huffed up, her crest fluffing out in annoyance. “What did you do?”

His foreclaw drew little squiggles in the dirt.

Char's mom let out an aggrieved sigh and sent a pulse of energy into the stone. After a little popping sound, the rock looked just like it had before her son happened to it. “I can't take you anywhere.”

She rubbed her beak against the back of his ears. “It's okay, hatchling. None of this is real. But be careful.”

“Nope.” She draped a wing over her son to steer him over to the board that explained the exhibit. “See, it's a replica. But there really is a place like it in the Dull Realms. And a flock of humans built it without any magic at all. Isn't that amazing?”

“You guess?” She bumped her shoulder against his. “You can't even clean your room without magic.”

The elder gryphon shook her head. Some days she really wondered why she aviary-schooled her child. 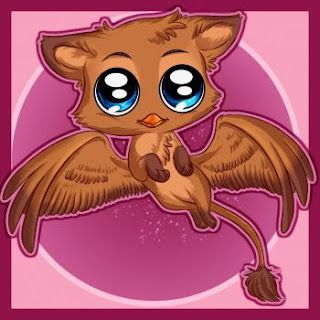 Cute little chibi-gryphon found at DragoArt, along with instructions on how to draw one of your own. Which I'm off to do now... :)
Posted by Andy Brokaw at 4:58 PM 2 comments:

Email ThisBlogThis!Share to TwitterShare to FacebookShare to Pinterest
Labels: fantasy

Shadows crept across the wall, hunkering down near the gritty stone and hoping that no one in the crowd below would notice him. It was just his luck that there would be a funeral today, interfering with his ability to get into the cemetery unseen. But it wasn't like he could just do this tomorrow. No, the task had to be accomplished at the rise of the full moon. It was tradition.

He could just imagine what would happen if one of the stupid humans looked up and saw him. “Ahhhh!” it would scream. Then another would join it, “A demon! It's going to kill us!” Right. Like Shadows had time to munch on random humans. Everyone knew humans took hours to prepare properly and the little imps waiting at home would be starving by then. What kind of father would make them wait for human meat when Chicken Shack was on the way home?

Finally at the right spot, Shadows slid down from the wall and made his way silently to row three, plot d.

As the moon slid into view, he laid a bundle of orange daises by Ember's gravestone, then went home to care for their young.

I found the prompt via +Writ on G+, but it's originally from Rachel Harrie's Campaigner Challenge.

Write a short story/flash fiction story in 200 words or less, excluding the title. It can be in any format, including a poem. Begin the story with the words, “Shadows crept across the wall”. These five words will be included in the word count.

If you want to give yourself an added challenge (optional), do one or more of these:

Email ThisBlogThis!Share to TwitterShare to FacebookShare to Pinterest
Labels: fantasy

Pieces of glass littered the floor, the bookshelf lay on its face, and the contents of the hall closet blocked the doorway.
Samantha was almost certain she had not left the apartment like this.
She forced her way into the room, mentally rehearsing her apology to Michelle. She'd known the argument they had before she left for her gig had left Michelle upset. She hadn't realized it left Michelle upset enough to trash the entire apartment.
All of Michelle's things were still around, as far as Sam could tell, even an incredibly awful cheapo guitar she must have finally got around to picking up for the lessons she kept saying she'd one day take. But there was no sign of Michelle herself. Sam assumed she'd called her brother for a ride somewhere. It had happened before and she'd always been home the next day.
But morning came and went. Sam cleaned the apartment, ran to the store to buy some of Michelle's favorite wine and some flowers, and tried not to stare at the clock as the time crawled by.
When the sun set, Samantha let herself call Michelle's phone. No answer. And her brother swore he hadn't heard from her all weekend. He'd lie for her in a heartbeat, but he wasn't very good at it, and Sam was certain he was telling the truth this time.
At a complete loss as to what to do, Sam sat on the sofa and pulled the shiny but almost toy-like new guitar onto her lap. If Michelle had asked for advice, there's no way Samantha would have let her buy something so... So discount store.
Oh, well. At least Sam could get it tuned.
Except, when she played a quick chord, she realized it was already in perfect tune. She was impressed with the thing. Nothing this cheap should have sounded so beautiful.
She played until close to sunrise before forcing herself to bed.
Although Sam thought of herself as a musician, guitar strumming seldom paid bills and the IRS considered her a barista. At least she was a barista in a relaxed cafe, the sort of place where an employee could take in a instrument and leave it behind the counter until there was a lull in customers, when she could take it out and play it.
It was pathetic to be dragging this thing around, she knew that. But like a lovesick teen can't help playing the same emo song on constant repeat, she hadn't been able to leave it laying alone in the apartment. Even though she was being silly. Even though it was Michelle's guitar. And even though Michelle was still so upset with her that she hadn't even called yet.
It was beyond pathetic to pull the guitar out and start the opening strings of the Beatles song Michelle, but she did it anyway.
“Michelle, my belle...”
Her heart broke as she sang, and she could have sworn the guitar was weeping. When she reached the end of the song, she yearned to gather the guitar in her arms and never let go.
But a customer stood by the bar, watching her with an empty coffee cup in his hand. Refills ranked above grieving hearts.
Sam put down the guitar and went to the counter, but the customer didn't hold out the cup. He gave her a long, studious look, before asking, “Where did you get that instrument?”
“I don't know.” She narrowed her eyes at the young man. He was in his early twenties, rumpled, and drowning under a pointy wizard's hat. All in all, he reeked of being an undergraduate at the Magic Institute. “It's my girlfriend's.”
The guy bit his lip. “You should ask her about it.”
Sam's spirits sagged. “Yeah, I'll do that. If she ever calls me back.”
“Oh...” The young wizard shifted from foot to foot before placing the cup on the counter. “I'm still in school. But... I don't think that's a normal guitar. It sounds enchanted.”
“Enchanted?”
“Yeah.” He nodded. “If it was on an exam, I'd say someone turned your girlfriend into a guitar.”
He tapped the counter, gave her a sad smile, and made an awkward turn toward the door.
The theory seemed ludicrous. Yet, it really wasn't like Michelle to disappear without letting her family know. So Sam leaned over the counter and yelled, “Wait! Could you break an enchantment like that?”
The student pushed his hat back from where it had fallen over his forehead. “If I had to guess, I'd say you have to destroy the vessel. But it's probably a romantic curse, so you'd have to do it somewhere special or on the right day or something like that.”
“How do you know?”
He shook his head. “There's no telling unless you know who cast it.”
And, of course, Samantha had no clue. She was, however, confident as she picked up the guitar again that the student was right. Holding it felt like holding Michelle.
“Oh, sweetie,” she whispered. “I'll fix this. I promise.”
Weeks came and went as Samantha made appointments with wizards, stalked the curses and charms on-line forums, and read every book the library had on breaking enchantments.
By the end of summer, she couldn't take the uncertainty anymore. Michelle's family had gotten worried and the police had opened an investigation into the disappearance, but while their techs could prove the guitar was enchanted, they couldn't prove it was Michelle. And they couldn't break the spell.
So on the eve of their anniversary, Samantha went to the train station where they had met. She'd play one last rendition of Michelle, then smash the guitar. Either the time and place would be right and her beloved would be free. Or Michelle would be truly gone and there would be tracks to jump onto.
She finished the song, gave the guitar one last kiss, and slammed it against the bricks. 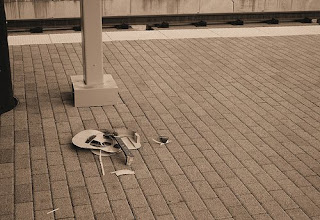 Prompt taken from this photo, found at The Flash Fiction Project.
Posted by Andy Brokaw at 12:40 PM 2 comments: