The Tangled Tentacles of Fate 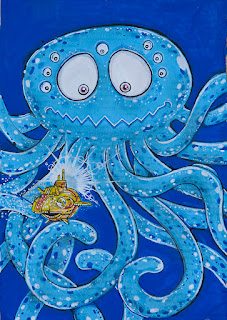 Agata swam under a sign labeling her as a eyhnu and blinked her many eyes, wondering for the zillionth time why it was that humans have such a hard time refraining from using flash photography. It’s not like there weren’t signs next to each display at The Zoo Aquatic reminding people not to use it. The worst part, Agata believed, was that since they were taking photos from inside submarines, there’s no way a photo taken with a flash was ever going to show anything other than a burst of light. Which meant Agata was constantly being blinded by people wanting a selfie with the giant tentacle “monster” but actually taking images of them next to a blinding light instead. Some humans, Agata was left to assume, were just dimwitted.

There was a petition going around the displays, as the creatures who acted like zoo exhibits were called, to insist that the human submarines coat their windows in something that would prevent the light from passing out. None of the management really seemed on board, though. Perhaps it was time to consider a strike.

It amused Agata to imagine the angry explosion Mr Apolusa, the owner of The Zoo Aquatic, would engage in should the displays decide they were tired of performing for minimal recompense and under conditions that were deteriorating, not rapidly but certainly with great regularity. The over-use of flash photography was just one of the complaints that could be filed. There were also concerns about the quality of food provided in the cafeteria, the inefficient fuel usage of the submarines, and the long hours during which displays where expected to be in their enclosures without bathroom breaks. The last one really got to Agata, who refused to do what some of the displays did and simply pee in front of everyone.

Nursing a headache, Agata went straight to her apartment as soon as she clocked out of work, stopping just long enough along the way to pick up a fresh algae pizza for dinner. It wasn’t, she knew, the healthiest choice she could be making, but who has the energy to hunt down fish while fighting off a migraine?

Normally, Agata would put something on her screen to binge watch, but she couldn’t deal with the backlighting, so brought out the novel she was reading, a romantic comedy about an orca who fell for a guy from the wrong side of the Puget Sound, or the Eei@ieey!!ie, as it was called natively.

Sometimes Agata dreamed of living in her own romance story, even though her previous attempts had been disastrous in the extreme. And when I say disastrous, what I mean is that of her five exes, only one had survived.

It was the survivor who knocked on her door this evening. “Oh, Paulo,” she said as she beheld him floating outside. “Why today?”

He moved about half of his tentacles in a struggle to stay put against the weak current. Half the tentacles he moved were solely to counteract ones that had moved erroneously, either in the wrong direction or with too much power. Paulo had always had difficulties staying put when he was nervous, which he appeared to be now if his pale pink pallor was anything to judge by. “Why not today?”

“Because we’re two weeks into tourist season and my head is trying to split in two even without having to deal with you.”

Paulo’s two largest eyes, the ones in the center of his head, dropped in discouragement. “Oh. I’m sorry. I’ll go away.”

As he started to turn, Agata was stricken with guilt over how mean she had been. Paulo really wasn’t a bad guy. That’s why she broke up with him rather than eating him like she’d usually do with a lover she no longer wanted. “Wait,” she said. “It’s okay. Come in.”

With a weak smile, Paulo adjusted course again and managed to navigate through the door. Agata’s apartment was decorated to be as close to a cave as possible, although the walls were far too straight and served to make people a bit uncomfortable with their uncanniness. This was the first time Paulo had seen it as he hadn’t visited since she moved our of their shared place last year. He tried not to stare, but a few of his smaller eyes did anyway. The apartment was so oddly boxed-shaped, he almost couldn’t process it. It reminded him of a picture he’d seen of a human dwelling, and he was puzzled as to why anyone would try to recreate that style underwater.

Agata closed the door and shifted in the uncomfortable silence. “How have you been?”

“Fine I guess. A lot of headaches. I think I’m getting more sensitive to light.” It was a common sign of aging, so Agata moved on quickly rather than discussing it further. “Still at The Zoo, but starting to think I might look for something a little deeper.”

“Really?” The question came quickly and contained an eagerness that threw Agata off.

Paulo looped a few tentacles through the water as he settled against a rock that was probably supposed to mimic a natural formation but was really just a singular rock sticking up from a flat floor. “It’s just… I’m moving down to i!eea@. My dad wants help with the hatchery.”

“That’s cool.” Agata mentally poked herself, trying to figure out what the emotion she was feeling in response to this was. It seemed almost like disappointment that he’d be further away. That couldn’t be it though, could it? They weren’t dating anymore, weren’t even really friends. What did it matter if he moved fathoms from her?

“Is it?” he asked softly, a few of his tentacles turning toward lavender. “You don’t sound certain.”

She wasn’t. But she could hardly tell him that. Instead, she shrugged a few tentacles. “Probably the headache.”

“Yeah, probably.” Paulo looked around the room, taking in the details. Whoever had built it clearly hadn’t had eyhnus in mind. It was built for something smaller, something more content to float in the empty spaces rather than wanting to cling to rocks. And it was too warm. And the pressure was too low. And there was too much light thanks to having a window, of all the bizarre things to have. He felt certain he’d have a headache just about every day if he tried to live somewhere like it, but he also knew that Agata wouldn’t welcome comments on the matter, so said nothing.

“And he liked you,” Paulo responded, allowing sadness to weave through the words. “My whole family did.” He let it go unsaid that he had as well. That he still did. That, in actual fact, he adored her completely and wanted nothing more than to whisk her down into the depths to breed a new generation of eyhnus. He was certain she didn’t want to hear it now any more than she had wanted to hear it the day she left him. “Anyway… I just wanted to say goodbye.”

Later, Agata would blame the headache for the way she had just smiled and let him go.

It was the next day before she realized that he hadn’t come to say goodbye at all, that what he had actually wanted was for her to protest his leaving.

It was the day after that before she realized she had wanted to protest, that she still did want to protest. But it was too late, wasn’t it? She’d already let him go and now she was just going to have to live with that.

It yet another day before she realized that maybe it wasn’t too late, that maybe he would still want to be with her even though she had let him go the other night. And maybe, she realized, even if it was too late, that didn’t mean she shouldn’t try. She knew, with suddenly clarity, that if she didn’t find Paulo immediately and tell him that if he was going into the abyss, then so was she, that she was going to… Well, not die. Probably. But certainly regret it for a very long time.

She decided she’d go after work. Then another flash went off and she said to herself, “Self, this is crap. I’m outta here.” Even though the day was only half over, she flipped the sign over to the side that read, “Creature not on exhibit. Try back later!” and quit The Zoo Aquatic without notice.

When Paulo’s eyes landed on her as he swam outside his cavern giving it one last look over before turning his key over the landlord, his whole body went still. “You look awfully pink,” he told her, his own body portraying a pleased deep purple hue even though he had been a shade of green that bordered on white just moments before.

Agata stared at him for a moment as her hearts raced each other to see which would explode first. “It’s not cool,” she said.

Paulo tilted his head. “What isn’t?”

A small smile skirted across Paulo’s lips. “Oh, it’s not?”

“No.” Agata realized she’d been drifting closer and was now near enough to Paulo to grab a hold of some of his tentacles, so she did. “Not if you’re leaving me here.”

“Is that so?” Paulo was grinning now, his skin now so deep a purple as to be almost black. “Well, the landlord already has a new tenant lined up for this place. So are you asking me to move into your weird box?”

“No.” The answer was quiet, blending into the rush of a school of fish that passed nearby. “I’m telling you to take me with you.”

Paulo’s tentacles rubbed against Agata’s, bringing a feeling of comfort and awakening a desire that she’d nearly forgotten. “I’d never be so foolish as to disobey you, my love.”

“You would too,” Agata said, smiling herself as her color rushed from pink through to navy blue.

The pair brought their foreheads to rest together, the eyhnu version of a passionate kiss.

As soon as they could pack up Agata’s belongings, they moved to the depths and found a lovely little cave that was close to, but not too close to, Paulo’s father’s cave. Paulo helped his father at the hatchery, later taking it over completely, while Agata started a small business selling items imported from the human world. Occasionally she gets a camera, and she always removes the flash.

Above image is Sea Creature And Sub by Malvy Westbrook. This and other paintings by Westbrook can be purchased on Fine Art America.

It was given as a writing prompt by my Wording Wednesday project. Other responses can be found in the comments on that site.
Posted by Andy Brokaw at 5:09 PM 2 comments: