Once Within a Solstice Tree

“Mom!”
Amelia closed her eyes. If she pretended not to hear her daughter, would whatever Bethy was yelling about go away?
“Mom!”
A cascade of pounding feet tumbled down the stairs to Amelia's basement workshop. With a sigh, she put down her tongs and stepped away from her bench, careful not to leave the chunk of frankincense too close to the bubbling cauldron.
“Mom!”
Amelia plastered on a smile for her child, who couldn't really help being a rambunctious bundle of energy. That sort of went along with being ten. “Yes, dearheart?”
“Hermione's in the tree again!”
Oh, good grief. Not again. “Did you spray her?”
“Yeah.” Bethy rolled her eyes at the silly question. “Of course I did. Didn't do any good though. I don't think she cares anymore.”
Well, that was lovely. The little varmint was developing an immunity to the nasty tincture that was making the entire house stink. She also hadn't been impressed at all with the Tabasco Sauce idea, the soap, or that bitter apple stuff from the pet store. Nothing would deter her from her quest to taste all of the Solstice ornaments.
“I bet fire would work,” Bethy offered as she trailed up the stairs after Amelia. “Though I don't think it would be great for the tree.”
“No, dear, it wouldn't be.”
The two entered their sitting room to find half the decorations from the tree on the floor. Hermione's brothers, predictably named Harry and Ron, sat on the mantle watching the action with vaguely amused expressions on their reptilian faces.
“Hermione!” Amelia snapped. “You get out of that tree right this instant!”
Branches ruffled, but no Hermione was forthcoming.
“I mean it.” She walked up to the tree, trying to find her elusive pet. “You get out of there right now or...”
She had no idea what to threaten, but as she was racking her brains to come up with something a tiny little nose worked its way into view. It was followed by two of the widest, sweetest eyes she'd ever seen and her heart melted.
People who read about dragons in books might tell you dragons survive by having thick scales and the ability to breath fire, but people who live with them know the truth: dragons survive by being absolutely adorable. 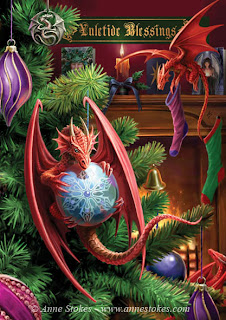 (Image is Little Helpers by Anne Stokes. It's on my calendar this month.)