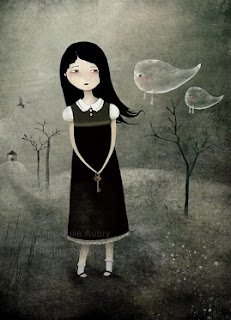 This story was written in response to this image by Anne-Julie Aubry which was used as a visual prompt on G+'s Writer's Discussion Group.

A thin layer of snow coated the ground and the weather was suitably frigid, certainly too cold to be outside in short sleeves and a dress. Emily could turn around and go back home, but that would mean admitting her mother had been right to yell at her to get a coat.

Her fingers ached as they clasped Grandma's key, and she longed for the new mittens she'd gotten just that morning for her birthday. But those, like her coat and her nice, warm boots were guarded by the evil witch back home.

Okay, fine, her mom wasn't an evil witch. She knew that. She still wasn't going back.

So she walked slowly despite the cold dark. The streetlights seemed dimmer than usual beneath a thick layer of clouds that blocked all help from the moon. A nearby bird called out in what sounded more like a death moan than birdsong and Emily shivered.

Grandma's house wasn't far. Just a block down a pleasant and welcoming street that, with every step Emily took, assumed more and more of an eerie countenance.

Another bird cried, closer this time. Emily stopped moving, letting the wind whip at her skirt as she scanned the dimness around her.

There! A flutter to the left, then a blurry whoosh of motion right in front of her as something flew across the road to land on top of the Alberbroch's shed. It sat, a shadow barely visible on a backdrop of dark, and stared straight at Emily.

Were you supposed to run from birds? Or would they chase you like dogs? Emily couldn't remember, but she was frozen in place anyway. Maybe the bird would eat her. Or maybe she'd be turned in a snowman and the Alberbroch family would find her in the morning when it was time for school and work.

The bird called out again, then flung itself back into the air and raced away

Emily tried to laugh, but it came out as more of a sob. She told herself to act her age – she was eleven now! – and hurried along, moving from the sidewalk into people's grass so she could run.

She didn't even think about slowing until she reached sight of Grandma's and spotted her standing on the porch. There wasn't enough ice in the world to keep her from rushing as she scrambled up the steps and flung herself into Grandma's waiting arms.

As soon as Grandma's warmth hit her, a feeling of foolishness rose up inside her, so she shook her head and mumbled, “I'm just happy to see you.”

“Uh huh.” Grandma didn't sound like she believed that, but one of Emily's favorite things about her was that she never pushed things like Mom did. “Well, let's get you inside.”

She turned to the house and put her hand on the handle, like she'd forgotten being locked out.

“I've got your key!” Emily said, holding it up in a hand that trembled only a little.

Grandma smiled and took the key, but didn't put it in the door.

“I just want you to know,” she said as she turned the handle of a door that was completely unlocked. “That this was your mother's idea.”

And there Mom was inside, under a banner that read, “Happy Birthday!”

Posted by Andy Brokaw at 6:59 PM No comments: 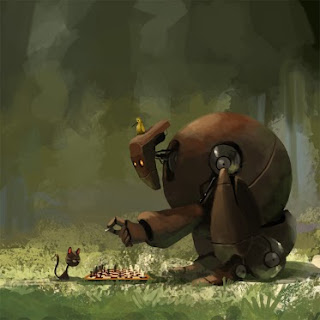 This story was written in response to this image by Goro Fujita, which was used as a visual prompt on G+'s Writer's Discussion Group.

Mayva frowned at the scene laying outside in the garden. “He's all rusty and he doesn't care.”

“I don't know,” her brother said. He pushed back the thick strand of black hair that threatened to cover his face. Mayva had no idea why he didn't cut it. Her own hair never got more than an inch long. “I think maybe he thinks he deserves it.”

As they watched, the once invincible IR-49-A, affectionately known to those he defended as Ira, moved a chess piece that put him one obvious move away from being in checkmate.

“And does he deserve to lose to a cat?”

Marc grunted. “Playing like that, I'd say he does.”

The cat moved a bishop and looked up in triumph.

“I don't get it.” Mayva leaned a hip against the windowsill. “Was there hardware damage from the Arbor Day fiasco? I know Zip is smarter than a normal cat, but...”

The siblings stared down as the songbird that had been sitting on Ira's head hopped down to take the cat's place across the chessboard.

Marc let out a long breath that smelled of the tuna sandwich he'd had for lunch. “He usually does. He's gotten a lot worse since you moved out. Not that there's a correlation there.”

“Have you looked into replacements?”

“Of course I have.” He shook his head and his hair fell into his face again. “We could afford one. But...”

“Yeah.” Although Mayva was the less sentimental of the two, even she wasn't keen on the idea of chucking the robot who had been equal parts bodyguard and nanny during her childhood. And it wasn't like the mansion was under that great a threat anymore. Things weren't like when she was little and they were attacked by other families on a weekly basis. “But if someone did do something, would he even defend us?”

Marc glared at her. “He's still Ira. His programming won't let him ignore an actual threat.”

“So is he depressed because there isn't one? Does he need someone to fight?”

“Dunno. I don't think so.” There was a long silence while they watched Ira's opening moves. He was, indeed, going to let the bird beat him. “He said something the other day about how it was nice not to have to worry about hurting people anymore.”

“But it's his job to hurt people!”

Below them, the robot spun his head. “No,” he said, startling his opponent.

There was no way the two upstairs could know he was talking. His mouth stayed in a perfect smiling curve whether he made noise or not. But they saw him looking and ducked out of view.

He turned back to the bird. “The humans just described my function as causing harm to other humans.”

The bird nudged a pawn, then clicked his beak in question. The cat, who sat beside the board watching the game, gave a snort and bent to lick her paw.

“My job is to stop people from being hurt.”

“Tweet,” replied the bird, acknowledging that this was an important distinction.

Ira moved a rook, wished his humans understood, and knew they never would. Not the spoiled children, now spoiled adults, that he'd killed to protect.

He shook his head, which dislodged a clump of rust. The rust drifted slowly from his neck to lay on the grass as Ira slid his queen into danger and hoped it was a bad enough move to help his avian friend win.

Posted by Andy Brokaw at 3:29 PM No comments: