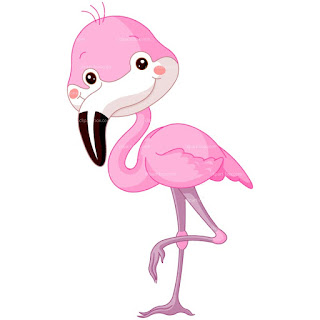 I don't know what I was expecting on my first day in the new office, but it didn't involve a live flamingo on my desk.

I mean, okay, sure, my official title is “Interspecies Liaison Officer” but I was given to believe that meant coordinating between Terrans and the various off-planet races employed by Galactic Cruislines and not talking to earth birds. I speak a dozen different languages, but the closest to Flamingo would be the Aahkyek language spoken by an avian species native to Khakuk, a planet orbiting the star humans used to call Gliese before learning that the locals prefer Kcahuh.

Standing in the doorway of my office, which is definitely mine because it says “Kayla McKinley” already, I run my eyes over the bird. It’s a little backlit by the windows behind the desk, which overlook a cute little park, but I can see it alright. It’s tall; standing on the desk means its head is just shy of the ceiling. And it’s very pink, looking in general like the earth species and not at all like a native of Khakuk. Nevertheless, I make the traditional screech that serves as a greeting in Aehkyek. Unsurprisingly, the flamingo doesn't so much as blink. It just stands there, one leg tucked against its pink body and stares blankly down at me.

“Hello? Ni hoa?” I try in English, then Mandarin. It tilts its head with a curve of its long neck. “Hola?”

Pretty sure that this is just a bird and not someone capable of speech, I walk into the little room.

As I draw closer to the flamingo, I pick up on a very noticeable, very obnoxious, odor. The whole office doesn't drink, though, which would suggest that the bird hasn't been here very long. As I see it I have two options: continue as though having a flamingo perched on my desk is a perfectly normal thing or find someone whose job it is to deal with the bird. But who would that be? My personal assistant, maybe? I met him when I had my tour last week, but he isn’t at his desk now and I don’t know how to contact him. What was his name? I wrote it down…

I walk around my desk, watching the flamingo as it watches me do so, and sit in the well padded office chair I’ve been provided. With one eye on the bird, I scroll through my wrist device until I find my notes from last week. My assistant’s name is Timalyk. And I have a number for Peggy in Personnel. I tap to have the device call her, but she doesn’t answer. Figures.

“Well…” I say to the bird. “If we’re going to be office mates, maybe I should give you a name. What do you think about Pinkamina?” Its beak parts at it makes a noise I can only assume means it doesn’t like the name. Maybe it’s a boy bird. “Pinkalamew?”

The bird yells at me again and I sigh. “Is that your name?” I make an attempt at yelling back with the exact same sound. The flamingo draws its head back but doesn’t scream again.

Outside the office, I hear someone running a moment before Timalyk appears. His eyes are wide behind his glasses and his cheeks wear a dark green flush that indicates physical exertion. He pants as he looks at me. “Ms. McKinley! You found Rover!”

The flamingo makes a happy noise and steps off the desk. It goes up to Timalyk and rubs its head against his chest like its looking for something in his pockets.

“Really?” Timalyk asks the bid. “You think you deserve a treat? After disappearing and harrassing poor Ms McKinley on his first day?”

“It’s alright,” I interject. “He deserves a treat for making sure I’m welcome.”

Timalyk sniffs before taking something out of his vest pocket to feeding it to Rover. “You’re a lucky waterfowl. She’s nicer than I am.” The assistant takes his eyes from the flamingo and moves them to me. “Do you mind if I take him back to the conservatory?”

“He lives in the building?”

“Oh, yes.” Timalyk snaps a little collar around the bird’s neck. “Rover here was hand-raised by Mr Keehan’s grandmother and her will expressly stated that he be taken care of.”

I nod as thought that’s a perfectly mundane situation. “Alright, Yes, certainly return him to where he belongs. Nice meeting you, Rover.”

Rover looks at me and releases a pile of poo on the floor. My eyes widen and my face goes still before I figure that laughter is probably the best response and let myself go.

Looking less amused than I am, Timalyk scowls at the floor. “Since it was Tiff who let him out, I nominate her to clean that up.”

As my assistant leads the company pet flamingo away, I log onto my new desktop with the username and password Peggy gave me to start going through my new employee materials. I’m not sure if I made a good choice accepting this job or not, but at least it looks like the office won’t be boring.

The above was prompted by me stating earlier today that my Wording Wednesday Season One theme of Beginnings would have been easier to do with words than with pictures. I rattled off the first line as an example and thought I'd move on without thinking about it again. I was wrong. The idea of continuing from there was too strong to ignore and I found myself writing this little piece. The cute little flamingo I used to illustrate it was found on Clipart Panda.
Posted by Andy Brokaw at 4:37 PM No comments: