The Modern Gospel of Lady Luck 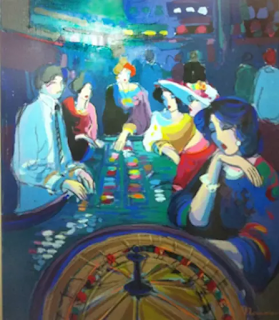 Marisa was the type of wealthy who could look bored while risking a hundred thousand Geodes on the spin of a roulette wheel. Her kind wasn’t uncommon in Essar’s gambling halls. Congregating in such places had long ago taken the place of attending temple worship amongst the upper echelon of Agrani society. Worship of the gods was out of style, replaced by worship of random chance.

People tended to assume that I was pleased with the state of affairs in Agran. I am, after all, the Goddess of Luck and thus the only deity actually in vogue right then. But I wasn’t. I love my Parent, They who created everything, and hated to see how many of Their creations had turned their backs on Them. In Agran, They used to be called the Father of All and invoked daily. But in the Thirtieth Century, the average Agrani wasn’t even sure They exist.

Choosing Marisa as my Prophet raised some eyebrows amongst the Heavens. No one could understand what I saw in her. Sure, she followed me, but she didn’t exactly do it enthusiastically. She only went to the casino every week to keep her parents from lecturing her on the importance of making appearances. But that was part of her appeal.

It was Marisa’s lack of concern for my whims that made her seem so approachable. That her wealth and social standing made her someone people would at least pretend to listen to was an added bonus. Trying to speak through someone who cleaned bathrooms for a living would appeal to my brother, the Lord of Toil, but would have made things considerably more difficult. When would that person even have time to go around lecturing the realm rather than doing something she would get paid for anyway?

At first, Marisa ignored my call. Although she was my first Prophet, I was expecting that. It was only after I cursed her favorite runball team, the Sarseet Seekers, to a winless season the year after they won the championship that she seemed to even believe I was who I claimed to be. “You have a choice,” I told her the next night I saw her in The Thelton, Sarseet’s premiere casino. “You can either have dinner with me or I can curse your niece’s hitdisc team next.”

“Seriously?” She stared at me. “You’re using a little girl’s peewee team to strongarm me?”

A laugh burst forth. “Yeah, okay. I guess that does back up your claim to be a god. A human wouldn’t be that much of a bitch.”

I shrugged and didn’t argue the point, although I was fairly certain any number of humans were capable of being just as shitty.

An hour later, we sat in a swanky restaurant with plates of pasta and glasses of wine in front of us. An hour after that, the pasta was gone and a second bottle of wine had just been opened. “So,” I said as the server left with our empty plates and an order for a fresh baked dessert that would take at least half an hour to fill, “are you willing to work for me yet?”

“No. I’m not that awful. I might make your niece lose a game, but I would never make her lose a limb or her life.”

“Alright…” Marisa took a long drink of wine. “What do I have to do to get you to leave her alone completely?”

Her eyebrows went up. “I’m not a writer.”

“Ever hear of divine inspiration? The goddess of arts owes me a favor. I can totally make you a writer.”

“Fair enough.” She swirled the red liquid in her glass, watching it slide along the sides of the container. “But why do you need me? Are you illiterate?”

I laughed. “No. But it’s against the rules for me to speak directly to the public. I need a Prophet to channel my words.”

“That makes no sense.”

“Can’t argue with you on that,” I said. “But my Parent is very clear that it’s a rule, and there’s no arguing with Them.”

“Them?” She put down the glass an leaned forward. “Plural?”

“No.” I shook my head. “Nonbinary. They were the first being in existence and the only one of Their kind. Why would They have a gender?”

“Huh.” Her gaze went distant for a while before she took a long swig of alcohol. “That sounds lonely.”

“I imagine it was. That’s probably why They created all of this.” I gestured around the room, but, of course, meant the entire universe.

“Okay…” She took another drink before meeting my eyes. “So you want to dictate something to me?”

“People are turning their back on my family. I want to fix that. Especially for my Parent.”

Marisa made a tutting sound. “So a book about how we should revere the gods and honor the Creator? No offense, but I can’t imagine anyone wanting to read that book.”

“Not even if the luckiest person in the world wrote it?”

There was some amount of jerking about of eyebrows. “I get that I was born to wealth and privilege, but the luckiest person in the world? Plenty of people have more money than I do. Some of them even have epic love stories and adorable children to add in. Whereas my runball team couldn’t even win a single match last year. I lost a million Geodes this evening at roulette. Who would believe I’m that lucky?”

I smirked. “Well, you aren’t yet. But you will be. We’re going to spend the next ten years making sure everything in your life is perfect, that every bet you make you win, that every company you own stock in excels, that you get whatever you want out of life, from even more money to true love.”

“You can get me true love?”

“Of course.” I waved my hand. “Romantic Fate is my nephew, remember? All I need it to know who to match you with, then I use my luck to make certain you meet.”

She considered this for a while, long enough that the waiter came out with our flamed custard pies. As she picked up her spoon, Marisa said, “What will it cost me?”

“I already told you. You have to write a book.” I tilted my head to my shoulder in a partial shrug. “And promote the book. Possibly build a new temple. But you’ll be remembered as a Prophet after living your perfect life.”

I drew in a breath. “I’ll treat them like my own.”

“Oh, no.” She lowered the spoon without taking a bite. “I’ve read too much about how you divine types treat your kids. I want you to treat them like you love them.”

“Cynical, aren’t we?” I took a bite of my own custard. It was creamy, sweet, and pleasantly tart. “Alright. Deal. I will watch over your descendants as though they are my personal treasures.”

“And I’ll have children?”

“If you want them. I’ve never understood the big deal about having them, but I’ll intercede with the Fertility Twins if I need to. Blen and Blynne have been after me for centuries to have my own offspring, so I can’t imagine they’d hesitate to help my Prophet in that department.”

“Alright,” she said softly before finally started to eat her dessert.

She looks over our opening ten years after that conversation as she sits before her computer screen with me pacing behind her and says, “I don’t like it. I mean, it’s what happened, but it doesn’t read like a holy text, does it? Those are all full of archaic wordings and outdating phrasing. Makes it all sound more official.”

I roll my eyes. “Mar, you’re being silly. Those texts are written in archaic language because they’re ancient. This isn’t. Look at the title, ‘The Modern Gospel of Lady Luck.’ It’s modern. Of course it’s not all, ‘Thou shoudlth look into thyself and observe the holy light of holiness within thine soul.’ Why would it be?”

“But how will people know it’s real?”

With a laugh, I give my Prophet a hug from behind. “Let me worry about that. You just type. Now, for Chapter Two...”

The above image is by artist Isaac Maimon. Learn more about his work on his webpage.

It was given as a writing prompt by my Wording Wednesday project. Other responses can be found in the comments on that site.
Posted by Andy Brokaw at 4:16 PM