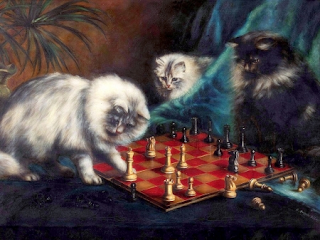 Agnes always played white, because that was the color of her fur and she got confused when she tried to play as black. This fact alone will likely give you some clue as to how good a chess player Agnes was.

Of course, there are those who would say a cat playing chess at all is remarkable, even if she did do it poorly. Her sister Gertrude couldn’t play. But the third of the litter, the long haired black cat named Augusta, could beat most non-ranked humans, so clearly felines can do better than poor Agnes.

Martha was never certain how either cat learned to play chess. She hadn't taught them; she barely understood the game herself. She only owned the chess board because it came in a set of games she bought to entertain her brother's grandchildren when their mother brought them to visit over the Thanksgiving break. The kids opened everything, played once, and then ignored it all in favor of handheld video games.

The following week, Martha woke up one morning to find the chessboard laid out on her kitchen table and two of her cats staring at it. As Augusta nudged a knight up one and over two, Martha poured herself a cup of coffee and wondered if she’d set the board up in her sleep. It was only after she watched Augusta’s queen swoop across the board to capture Agnes’s bishop that she started to wonder if the cats were actually playing the game rather than simply playing with the pieces. And it took Agnes hanging her head in shame over her king getting captured in check mate for Martha to fully understand what she was watching.

While the cats sat the board up for another game, Martha went to the box and opened up the booklet that explained the rules. At this point, she was expecting to have a laugh at her credulity that she could share with her coworkers in the church office, but as she read the rules, she realized the cats were playing by them.

When she told Father Fishbourne that she was worried her cats might be possessed, he listened patiently. In his years in the priesthood, he had heard many claims of possession though he had never actually witnessed an occurrence of it. He was fairly confident that demonic possession wasn’t a thing that actually happened, but felt duty bound to respond to situations like this one as though seriously considering the possibility that a denizen of hell had taken over the mind of housepet.

When Father Fishbourne entered Martha’s kitchen, he saw nothing that led him to question his default assumption that Martha had simply seen her cats batting chess pieces about in mockery of human play and misinterpreted the situation, but as soon as he sat down beside the prepared gameboard, Augusta jumped onto the table and gave him a very solemn nod.

“She wants you play,” Martha said. Then she shook her head and muttered under her breath, “I knew I shouldn’t have taken the black one.”

“That’s a myth,” said the Father. “That black cats are evil. They’re no more of less so than any other cat.” Although the expression the cat appeared to wear as he said this made him less certain of the truth of this than he had been in the past.

The good Father’s eyes widened considerably as Augusta craned over the white pieces before her to take the king’s knight into her mouth and jump it over the row of pawns. He countered by mirroring the move, which earned him a slanted look from the cat, who then moved a pawn.

After ten minutes, Father Fishbourne realized he was in check mate. To a cat.

He leaned back and studied the animal. “I’m going to have to do some research.”

Thus began a week of the Father coming over every afternoon to play chess with Augusta. Occasionally he won, but it was clear the feline was the superior player. To salve his ego some, he also played against Agnes, who he typically beat. It was, he considered, a sign of her good nature that she continued to play the game when she so seldom won at it.

He ruled out demonic possession fairly early on with the easy test of blessing the water in their bowl and watching as they drank. The water had no effect, which it should have if demons were involved. What he couldn’t figure out was what was left. Could they be possessed by angels? What would be God’s motivation in arranging that?

The very next Thursday, the Father was given a possible answer to that question when the first major snowstorm of the season hit. The roof of the church-run homeless shelter valiantly held off the snow, but was powerless when half a frozen tree crashed through it. The shelter now had a massive hole in the roof right when the unfortunate souls who relied on its embrace needed it the most.

As the shelter’s board of operations frantically brainstormed how to raise money for a new roof, someone mentioned strange fundraisers they’d seen. “One time, this professional chess player did a fundraiser were he held a series of games where people could pay him to play against them. They built like an entire soup kitchen or something.”

Clarity struck Father Fishbourne and Martha at the same instant. “Augusta!” they exclaimed.

Father Fishbourne shook his head. “No, Brother Wallie. Not the chess player. Or not the human one. Martha has a cat who plays chess. Well, two of them. But one of them plays well. Do you think people would pay to play against a cat?”

Brother Wallie stared. “I think they’d pay to watch someone play the cat.”

“Playing the cat would be better,” said Sister Teresa, the head of the Sunday School program. “That way they’d know it was responding to them and wasn’t just trained.” She blinked. “Wait. The cat can play chess. Really?”

It wound up being a good thing that Augusta was the better chess player, because when the cats were brought into the church the night of the fundraiser, Agnes flipped out and spent the entire evening hiding behind the refrigerator in the kitchen of the Fellowship Hall. Augusta, however, sat proudly before the provided chessboard, a much nicer one than she had at home, and faced every challenger with dignity.

No one beat her that evening, even though enough people played her to raise over half of the needed funds in the one night.

Two days later, she was invited onto the local newscast were a reporter played against her and lost while his colleagues told him all the moves they would have made in his stead. They were invited to try their hands against her at the second night of fundraising that Friday.

By Sunday morning, Father Fishbourne was able to announce that they had sufficient funds to not only rebuild the roof, but add an annex to the building so that it could house more people.

As she prayed her thanks, Martha realized that while God may have given her this blessing to save the homeless shelter, He probably didn’t want things to stop there. The cats could, after all, still play chess. So she started Miracle Chess Kitty Charities and now tours the country raising money for nonprofits with the help of Augusta and Agnes, who eventually grew less terrified of people and provided a good opponent to the type of person who doesn’t want to say they lost a game of chess to a cat.

If you’re interested in booking a match against Augusta, you can contact her scheduling agent at (555) 555-5267. And should you lose to her, you may be interested in commemorating the event with an official “I Lost to Augusta the Miracle Chess Kitty” t-shirt, available in her traveling gift shop after every event.

The above image is by Augusta Agnes Talboys, an artist who painted a lot of cats in the early twentieth century. You can learn more about her at The Great Cat.

It was given as a writing prompt by my Wording Wednesday project. Other responses can be found in the comments on that site.
Posted by Andy Brokaw at 11:01 AM