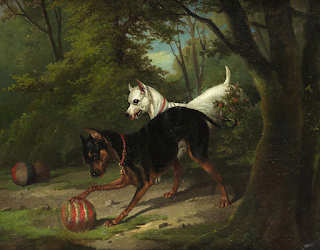 As the three gnomes sat in a tree, Minz, Moin, and Maleka felt rather overwhelmed and quite sorry for themselves.

“They just keep playing with it,” Minz moaned, her eyes on the pair of very large canines batting The Queen's Holy Orb around the clearing. The trio of gnomes were at their wits’ end. Clearly, they couldn’t just let the dogs continue to play with the religious artifact they’d been charged with carrying through the forest from its old home in Egdasmont to its new home in the recently built cathedral in Umnaspurt. But the dogs were massive, both taller than Maleka, who was herself much larger than Moin, who was in turn taller than Minz. And the dogs were obsessed with The Queen's Holy Orb, to the point of ignoring the similar sized ball the gnomes had already tried to distract them with. Although, on the plus side, they were also too obsessed with The Queen's Holy Orb to try to eat the gnomes, something the gnomes greatly appreciated.

“Hey, dogs!” yelled Maleka. “That belongs to the church! It was a gift from Queen Elspin!”

The dogs were not impressed. They didn’t so much as glance at Maleka as they wrestled each other for the honor of being closest to The Queen's Holy Orb.

Moin leaned forward, balancing so that his arms rested on his legs as they dangled from the branch he sat upon. “There are two dogs and three of us. If two of us could each distract a dog, the third could grab The Queen's Holy Orb.”

“We could jump on them.”

Minz and Maleka stared at their companion. “Jump on them?” Maleka repeated. “You mean after we ask them nicely to lay down and be still? Hey, dogs! My friend wants to jump on you! So if you could stop running around and lower yourself closer to the ground, that would be awesome!”

No one was surprised when the dogs failed to comply, choosing instead to growl at each other as they tried to push The Queen's Holy Orb in different directions. The growling made Minz shiver. She’d had a bad experience with a Pomeranian as a child that had instilled a great distrust of all canines into her psyche. She’d been the first to climb the tree and was determined to be the last to leave it.

“What if we hit them with something?” Moin said. “You know, knock them out? Don’t you always carry a pouch of sleep powder, Minz?”

“I do,” the shortest gnome answered. “But I’d have to hit them right on the nose, which would be hard to do from up here. And there’s only enough for one of them.”

Maleka made a thoughtful noise. “Okay. So we’d have to send someone down to hit one of them right in the face and then hope the dog doesn’t try to eat that person while waiting for the powder to kick in. But that would still leave one dog obsessed with The Queen's Holy Orb. If we assume we couldn’t successfully jump on him and steer him away, what could we do?”

“Do we have any food?” Minz asked, remembering that dogs like food.

Between them, they found a hard candy that had seen better days, a melted piece of chocolate, and a quarter of a donut that Moin had been saving for later. They tossed the donut and one of the dogs did actually notice it, but only for as long as it took to swallow the baked good in one gulp.

“Well,” said Moin. “I think I would have been better off eating that myself.” And the others couldn’t argue otherwise.

“Could we steal a dog whistle?” Maleka asked. “One of us could run far away and blow it, then the others could grab The Queen’s Holy Orb when the dogs ran to the whistle.”

They all liked that idea, but no one had any leads as to where they could find a dog whistle.

“We could pray?” Minz offered. “I mean it is a HOLY Orb, right? So maybe the gods would try to protect it? You know, if we told them a pair of dogs was playing with it.”

The other two shrugged and they all bent their heads while Maleka addressed their deities. “Oh heavenly parents, ill has befallen the most sacred Orb of the Heavens. Please help us free The Queen’s Holy Orb from the beasts that have taken possession of it so that we may see it interred in the cathedral in Umnaspurt. Um… We offer you this piece of chocolate and hard candy in addition to our adoration as we pray that you will come to the aid of us, your unfortunate children. Thank you for listening. Amen.”

Then they all looked around expectantly, their shoulders falling as no bolts of lightening struck the dogs. Moin sighed. “Maybe they didn’t hear us? Should we try again, but louder? Maybe if we all spoke at once?”

Frustrated, Minz ripped a pinecone from the tree they sat in and lobbed it at one of the canines. It bounced off with no effect other than to make the dog let out a bark of annoyance. No one was surprised as throwing things at the dogs to get them to run away was the first thing the gnomes had tried.

From somewhere behind the gnomes, a door opened. A human voice cried out, “Hestor! Brunhilda! Dinner!”

The dogs’ heads snapped up. Before the woman had finished calling for them, they were sprinting toward her, The Queen’s Holy Orb completely forgotten.

The gnomes slid down the tree and the taller two picked up The Queen’s Holy Orb between them while Minz kept a lookout to make sure the dogs weren’t returning.

When the trio finally made it to the cathedral in Umnaspurt, they handed The Queen’s Holy Orb over to the bishop and went straight to the pub, where they offered a toast to the gods but swore never to take another job from the church.

The above image was painted by Alfred de Dreux.
It was offered as prompt on my Wording Wednesday Project
Posted by Andy Brokaw at 3:46 PM