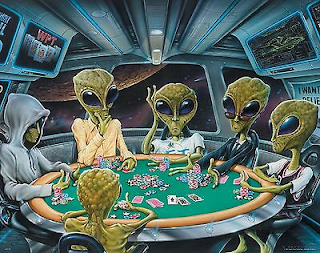 “They’re doing it again,” said Eeshkik. “The humans. You know, the ones we’re supposed to be watching. They’re launching something new. The North American ones.”

The only crew member to so much as glance at her was Kakal, who was wearing a shirt that ironically featured the human letters ‘e’ and ‘t’. He gave her a stare with his huge black eyes and tapped the side of his pretty green head in the gesture their species uses to communicate, “So what?” No one else looked up from the game they were playing.

In the defense of the entire uncaring crew of The Muse of Stars, the game they were playing was one they’d picked up from the planet they orbited and had been tasked with studying. Also in defense of the crew, they were circling Earth waiting for the planet to settle down long enough to make first contact, and while they had only been doing this for half a year, their civilization had been doing it for centuries and the planet was pretty much as studied as it was going to get. In a few weeks, they’d get to go home and some new saps would be left watching the endless wars the local barbarians so loved to engage in. Still, Eeshkik was their captain, so she felt they really should pay at least a little bit of attention to her when she said stuff.

“I’m captain here,” Eeshkik proclaimed. “You need to listen to me!”

Geklac met her gaze. “You’re only captain for another ten minutes. Then it’s Acklec’s turn.”

“I’m aware of the rotation.” Eeshkik sniffed. “But I’m captain for now, and I need someone to write up this new satellite.” She paused for a minute. When no one volunteered, she said, “Geklac, get started.”

“You’re not winning,” said Kakal. “I see your raise. Anyone else in?”

The other two who had still been in the round nodded their heads to indicate they declined and quietly folded their cards. “Alright, then,” said Geesh, who had been dealing. “Show us what you have, boys.”

“Yeah, let’s see what you went all in with,” Kakal told Geklac.

Geklac did a little shimmy as he flipped his cards. “Full house. Three kings and two eights.”

Eeshkik’s eyes widened in dismay on Geklac’s behalf. The kings were sitting in the middle of the table, on what was called the river, meaning everyone got to use them. Betting all of his chips on the hand had probably been a mistake. Sure enough, Kakal gave an amused huff and revealed his cards to show that he also had a full house, but his was kings and aces.

The curse Geklac handed out doesn’t translate well into English as humans don’t have the body parts referenced, but if you can imagine the most disgusting thing someone could say about your mother’s nether regions, you’d be close.

With a hum of annoyance, Geklac pushed back from the table, rose, and stormed off to find a computer to enter the data on Earth’s latest launch into. Eeshkik slid into his vacated seat, her eyes going to the chronometer. Eight minutes and she wouldn’t be captain anymore. She leaned back, putting her feet in Kakal’s lap. She’d hoped doing so would prompt her husband to massage her calves, but he instead tapped the table to prompt the next deal. Which was proper; personal relationships were expected to be ignored when one was serving as captain. Even if you were down to seven and a half minutes on the job.

Cards went out to everyone at the table, minus Eeshkik, because captains also don’t get to gamble with the crew. “Seven minutes…” Eeshkik muttered under her breath.

Another two minutes passed, during which half the table folded and two new cards came out on the river. Then everyone flinched as the claxon started blaring.

“What the Ghost?” Eeshkik exclaimed as she leapt up and rushed to the control room with the rest of the crew running behind her. “Geklac, report!”

“It’s coming straight at us!” Pointing at a screen, Geklac brought Eeshkik’s attention to the display that tracked all the crap the humans had littered their planet’s orbit with. One object was quickly approaching their ship. “How do they even know where we are?”

“Gamma launching!” came the swift response. “Everyone hold on to something! In three... two... one...”

Everyone who could grabbed hold of chairs or the handles spread around the compartment. Everyone else went flying as the ship lurched into motion.

“It’s following us!” reported Geklac. “And I don’t think we can outrun it without stardrive.”

Sure enough, the display indicated that whatever weapon the humans had lobbed at The Muse of Stars had altered course to track with the ship. Which meant that the humans had developed the technology to overcome the jamming illusions all Kuykkan vessels put out when trying not to be seen by primitive civilizations. And had launched a weapon without so much as broadcasting a hello. Talk about rude.

Eeshkik gurgled in exasperation. She still had four minutes left on her shift. “How much time do we have?”

“About a minute. It’s still gaining.”

Well, there was no helping it then. “Fine,” grumbled Eeshkik. Initiating stardrive inside a solar system would be unspeakably dimwitted; the odds of hitting an object before you see it are just too high in such a crowded place. Which meant they had to destroy the weapon despite the fact that this would confirm their presence. The humans had spotted them anyway. “Zap it.”

The crew cheered, but Eeshkik glowered at the chronometer. Still two minutes left on her shift as captain, which meant that the piles of paperwork required anytime the zapper was used were going to be her responsibility, as well as the nightmare task of writing a report trying to explain that humanity now posed a threat to anyone close to their planet.

“Set a course to the other side of the astroid belt,” the captain said in a defeated voice before slinking off to her cabin as she griped internally about how if all of this had happened just five minutes later, it would have been Acklec’s problem and he would be the one spending the next several shifts dealing with bureaucracy. Some things really weren’t fair.

The above image is from a poster by an unknown artist. You can buy it on Amazon.
It was offered as prompt on my Wording Wednesday Project
Posted by Andy Brokaw at 4:20 PM