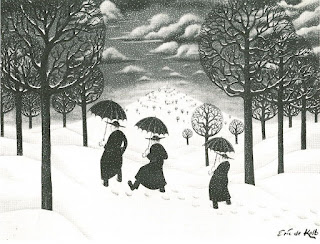 The new queen’s edict says I’m not allowed to lead humans to their deaths anymore. It is seriously tempting, though. I mean, look at them! They’re traipsing about like complete fools!

They aren’t really little, though, not for humans. They’re full grown examples of the species, and male I’m pretty sure. They walk in a line, one after the other, as the second two try to keep their feet within the steps of the first even though that one is much larger than them. It’s quite ludicrous, particularly as the human in the lead seems to have no idea where he’s meant to being walking. He chooses his foot placements without any regard to drifts of snow or changes in terrain and is cutting in a direction that will eventually take him to the river a very long way from the bridge that crosses it.

The man in the back keeps looking to the side, toward where the nearest human settlement is. He should be able to see the shape of their big religious building. What do they call those silly things? Kurches? It amazes me that humans think they can trap the divine within walls, but few things about humans make much sense.

“The littlest knows,” Capella says. “He knows they’re going the wrong way. But he isn’t saying anything. Why is that?”

“I assume the taller one outranks him. Would you tell the queen she’s wrong?”

Capella shudders. There used to be three of us, too, until Litinay spoke out against Her Majesty to defend our right to mislead humans as our kind always has. Apparently although the queen wants to save human lives, she doesn’t care so much about those of sprytes. But don’t quote me on that.

Her gaze on the one in the front, Capella tips her head to the side. “We’re not allowed to lead him into the river. But could we lead him into town? I bet he’d fight us. It could be fun. Even if he won’t die.”

I chuckle. “And if he fights us and drowns… Well, we’ll honestly be able to tell the queen we were trying to save him.”

After a crack of my knuckles, I move my fingers toward the lead human. My childhood magic instructors all insisted that I could lose the gesture, but my mind reading skill never seems to work without it. “Ah… There we go. He’s in love with a woman whom he’s not allowed to love…” Oh how I adore such tragedies! “And now he thinks she’s standing in the direction he should turn beckoning to him!”

Capella claps as the man looks over at the illusion. He’s really bad at hiding his emotions, so his longing for the woman is clear. So is his fear. He knows she’s not really there, possibly because she is not the type to walk to another town and I’ve failed to give her a carriage. Making the sign of his god across his chest, the man stumbles faster toward the river.

We’re both laughing as Capella says, “My turn!”

I can’t see the illusion she creates, but she tells me, “Now there’s a path heading forward that clearly tells him not to go that way.”

We bend over with the giggles as the man walks even faster toward the river.

“Let’s do one of the others!” I latch onto the mind of the man middle in line and make him hear sounds coming from ahead.

“Mister Paulson!” the man screeches. “Stop! There are wolves that way!”

“No,” responds the leader. “It’s an illusion. It would seem these woods really are haunted by evil spirits who would lead us astray. I am certain this is the right path. They are trying to convince us to leave it by using their demonic magic. I myself have resisted several illusions designed to change my course.”

The middle man swallows, his eyes moving around like he’s not certain if he should believe this or not. Both of the front men repeat the religious crossing of their chests while the middle one mumbles to his god to protect them from us. It’s all I can do not to fall from my perch in my amusement. My free hand clings to the tree branch and my wings flutter to maintain my balance despite my violent laughter.

“Now the third man!” Capella chirps. The last in the row is still quiet, his head bowed like he’s concentrating on the ground. “Odd… I can’t reach his mind. Can you?”

My fingers twitch toward the third one and I frown. “No, I can’t. Interesting…” I try to cast an illusion for him, a generic one involving a child calling for help, but he doesn’t so much as twitch in response. Very interesting indeed.

At this point, the men have moved far enough that we have to leave our tree if we’re going to follow them. They’ve already provided enough entertainment for me to be tempted to stay put, but my inability to read the mind of the last one intrigues me enough to leap from my seat and flutter after him.

Capella likewise springs off, her lavender wings having no trouble keeping up with me as we buzz through the increasing snowfall. The men all have umbrellas, although the snow is falling at enough of an angle that it’s hitting them anyway. They rush along, clearly chilled by the cold. Capella and I have the shelter of our magic spheres, though, so remain both dry and warm.

“Should we do more?” Capella asks as she flies at my side.

“Sure, why not?” We cast a few more illusions for both of the two we can affect. Each time, they resist our attempt to alter their course. Maybe we’re getting some of the details wrong, not trying hard enough to get them to truly believe that old friends yell for them or that dangers lurk the way they’re heading.

When they get to the river, I send the image of a pretty female to them both. She begs them not to go forward, beseeching them to believe her that the river is real and that they will drown. Yet one after the other, they traipse right into it.

I snort as the first one goes under the current. “You should have listened.”

Capella shakes her head as the second on likewise sinks into the water. “Silly humans. We did warn you.”

“Yes,” says the third human, still standing very much on the riverbank. “You did. But some people are beyond saving.”

Capella and I both stiffen in surprise. Humans don’t usually see us. Of course, while they don’t always believe our illusions, they don’t usually fail to perceive them either, so maybe we shouldn’t be so shocked.

The third man looks straight at us, touches the brim of his hat, and gives us a little nod before turning toward town.

As we watch him go, I realize that it’s been some time since lunch. “Let’s go find some food.”

We propel ourselves toward town as well, intent on sweet pastries for tea. And if we happen to learn more about the odd human on the way, so much the better.

Above image is "Snow Scene" by Eric de Kolb. You can buy copies of it at https://fineartamerica.com/featured/a-winter-scene-eric-de-kolb.html.

The image was offered as a prompt on my writing prompt project Wording Wednesday, more information about which may be found at https://wordingwednesday.blogspot.com/
Posted by Andy Brokaw at 12:54 PM