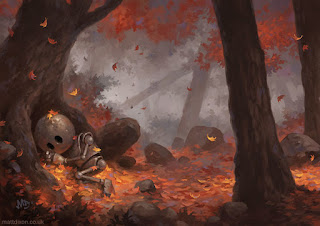 “Zike!” the child calls. “Where are you? Come out, come out, wherever you are!”

Zikon lets out a small sound of laughter. Not a loud one, but a subtle one. Their programing allows them to feel amusement, but the laugh is more for the girl’s benefit than theirs. It’s a clue, you see. Because although the girl has told them to come out, they know she doesn’t mean it yet. She’ll let them know when she becomes so frantic that the game is over. Until then, she’ll look through the forest in search of her friend. And hopefully in the process, she’ll find the surprise they’ve planted.

“Zike! The leaves keep moving! They covered up your tracks! It’s no fair!”

The robot lets out another chuckle, a little louder than the last one. This child hears this time and goes still. “I heard that!” She begins to creep in the right direction. “I know you’re here somewhere! You didn’t climb a tree, did you? We agreed no climbing!”

Indeed, they did. Just last week one of the child’s friends fell from a tree. Zikon would never forgive themselves if something like that were to happen to their human. And for an artificial intelligence than can be easily ported into a new body when one wears out, never can last a very long time.

The girl has made it to the other side of the tree Zikon lays behind when she spots something. It’s shiny like a gemstone, not shiny like the metal of Zike’s casing, but she stops anyway. Kneeling to the ground, she reaches for the shiny object. It sticks out like a rock, but when she tries to pick it up she realizes it’s attached to something buried. “Zike… I found something weird.”

If Zikon had a face that allowed for smiles, they would smile now. You see, they planted the shiny object. It’s the top of a jar made of brightly painted glass, which the girl sees quickly as she pulls it from the soil without questioning why the dirt around it is packed so loosely.

Feeling proud of themselves, Zikon climbs to their feet and goes to look. The rest of the day, they know, is going to be given over to hunting for a mysterious treasure. “Let me look.”

The child reaches out and taps her robotic companion. “I found you!” she says as she holds up the map Zikon drew the night before and hid as she lay sleeping. “See this? It was left by a fairy! She says that if I follow all the clues and prove myself worthy, I’ll get something. What does that say?”

“Wow. I’ll get an enchanted treasure. I want one!”

“Oh, yes.” The girl nods with all the solemnity a six-year-old can muster. “They are. And very pretty. I will find it and it will make Loiuse Sinclair all kinds of jealous, because even if she found a note like this, she’s not smart enough to figure out where to go!”

The girl tilts her head. “Well, that’s a picture of the waterfall. So I think we look near there.”

“Very well,” says Zikon, somewhat wishing that they did have the ability to smile. “Lead on, my lady.”

Grinning, the child leaps up and starts to run through the woods, her metal friend close behind her. When the girl grows up, she’ll come to realize that most of her childhood adventures had been orchestrated by her loving nannybot. But for today, the magic is real.

The above image is "A Matter of Time" by Matt Dixon, whose work may be found at https://www.mattdixon.co.uk/

The image was offered as a prompt on my writing prompt project Wording Wednesday, more information about which may be found at https://wordingwednesday.blogspot.com/
Posted by Andy Brokaw at 3:26 PM