On the Edge of the Sea 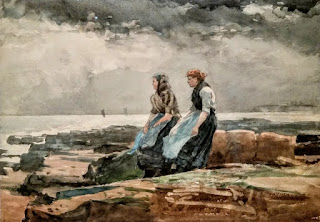 Overhead, the sky regards me with the same dispassionate grey as my lover’s eyes as the breeze blowing off the sea ruffles my hair despite the shawl I have over my head. “It’s the perfect time,” Eethea tells me. “I don’t understand why you want to wait.”

My teeth dig into my lip as I try to think of the words to explain with. See, the thing is, I don’t want to wait. Because I don’t ever want to down another ship, whether it be this storm or five storms from now. Back home, everyone warned that if I moved to land, I’d eventually start to feel this way. I didn’t believe them, though it seems I should have. The smell of salt rolling off the sea still fills me with comfort, but I’ve become too acclimated to shore.

“You skipped the last feast,” Eethea reminds me, as though I could have forgotten either the massive argument we had about it or intense pain I felt as my covenmates gorged themselves on the sailor’s life forces while I stayed hungry. “People are already assuming I’m your daughter. If you keep aging like this, they’ll be thinking you’re my grandmother soon.”

“Would that be so bad?” I ask, my eyes moving over the rolling waves before us. Their peaks are growing taller and white caps have appeared across the bay to which we were exiled decades ago. “At least then people wouldn’t think we’re sinful for loving each other.”

Her arms fold over her worn human-style dress. “And why do you care if they think we’re sinful? Sure, in Kesh they might stone us for it, but in Ahland they’re all pacifists, so they just shake their heads and move on. How does them shaking their heads harm you?”

I let out a long breath. “That’s part of the problem,” I tell her. “You’re asking me to kill someone who isn’t willing to kill me.”

“So, what? You want to wait for a boatload of Keshmen who happen to be here when a storm hits? Or do you want to drown them without the cover of a storm?”

“Well, that is a law I’m surprised we’re still abiding by,” I say, mainly as a way to deflect the conversation. I don’t think I really want to drown people from Kesh either.

Eethea rolls her eyes. “First off, it’s a good rule because we don’t want to risk a survivor having seen us and that’s less likely if we strike during a storm. And secondly, they may not be willing to kill you for being intimate with another woman, but they most certainly would if they knew you were yiishka.”

Yiishka… What the humans call merfolk. I’ve been on land long enough that hearing words from my first language seems strange.

Placing her hand over mine, Eethea goes on. “I understand that they’re intelligent animals with a complex social structure and deep felt emotions, but they eat whales, who are not only all of those things but also more friendly. And who don’t eat them back. Really, humans are terrible.”

“I know…” I turn my palm over so that I can grasp Eethea’s fingers. “I just… Maybe if it were a one-on-one trade, I’d feel better about it. I’d find someone truly horrible and steal their life to fuel mine. But I need to kill at least a dozen people to make much of a difference, and more would be better.”

“Only because you’ve waited so long.”

With a gentle tug, my lover pulls me closer to her side and I lower my head to her shoulder. She tilts her head until her cheek rests against my hair. “I know it’s hard, baby. But there’s only so long you can go without eating before you’ll die. Don’t do that to me.”

Of course Eethea found a way to make it about her. “And what about the people who love the sailors? It’s okay to doom them to widowhood?”

“They’ll only live another few decades at most, then they’ll escape from their pain. I could live another thousand years with a hole in my heart where you’re supposed to be.”

“If you keep murdering people,” I mutter.

Eethea stiffens and straightens her head so that it’s no longer touching me. “Since when has it been wrong to survive? We’ve tried taking the life energy from other creatures you deemed less deserving of life and it didn’t work. You remember that, right?”

“So what choice do we have?”

That’s obvious. “We could grow old and die.”

“Right. Which isn’t really a choice. I don’t know why the Great Mother designed us this way, beloved, but she did. And she wants us to live.”

“Now you get religious on me?” I ask as I sit up. “Most of the time, you think the gods aren’t real.”

She shrugs. “Fine, then. We evolved this way and evolution wants us to live.”

“No, it just wants us to procreate. And neither of us are doing that. We accepted exile to avoid doing that.” Sometimes I can’t remember why. The Queen didn’t want us to break up or anything, she just wanted us to get pregnant and help grow a new generation below the sea. Would it really have been so bad to spawn some brats and raise them with Eethea back home? Sex with a male doesn’t seem like it would be pleasant, but it’s not like it would take terribly long to get it over with either. “If anyone wants us to live, it’s Queen Eilka. She’s the one so upset about the declining population that she’s willing to toss her own daughter out of the sea.”

Eethea scowls. “I may have Mommy Issues, but not enough of them to kill myself to spite her. And I’m certainly not going to let you die just to flip her off.”

“Is it really killing ourselves, though? To let nature take its course?” My eyes go back to the ocean. The tide is coming in and we should move soon, either going back to the city or out into the water. Sitting on the shore wet isn’t an option as saltwater will turn us back into our aquatic forms.

“Skiya, if a human stops eating and dies, do people say it was an accident or do they say he starved himself to death?”

I study the water as I think about that. She has a point. “But…”

“Humans don’t usually eat humans,” she says calmly. “But sometimes they do. If they’re somewhere with no other food and it’s the only way to survive, they absolutely will eat either other.”

“I’m not sure that really happens. It might be a myth.”

“Well, I am sure. Because I’ve met humans, and while they’re sentimental, they’ll do whatever it takes to live. So maybe a few of them wouldn’t eat a party member, but I honestly believe most of them would if their survival were at stake.” She twists in order to take my chin in her hand and turn my face toward her. “This is no different. Even if you say now that you’re willing to deny yourself the energy you need to live, do you really have the willpower to slowly starve to death?”

I hate the fact that the answer to that question is probably no.

“Come on.” Eetha stands up and holds her hand out to help me to my feet. “Let’s get in the water and then decide.”

Once in the water, my thought process will change. In the water, I’ll no long see myself as anything akin to the humans. In the water, the sailors will seem like food and not people. But I let myself walk to the surf anyway.

The above image is Looking Out to Sea by Winslow Homer.

The image was offered as a prompt on my writing prompt project Wording Wednesday, more information about which may be found at https://wordingwednesday.blogspot.com/
Posted by Andy Brokaw at 2:08 PM