This Is NOT a Romantic Comedy 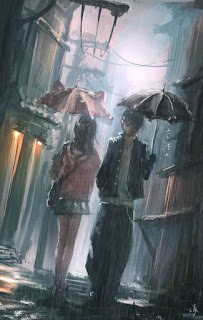 In the genre of romantic comedy there is a trope called the meet-cute. Merriam Webster defines meet-cute as "a cute, charming, or amusing first encounter between romantic partners" and somehow bumping into each other in the rain would certainly qualify.

So if this story was a romantic-comedy, or rom-com, when Yuki, Hayato, and their respective umbrellas approach each other in a downpour, something would happen to force an interaction. Perhaps Hayato's umbrella would spontaneously break, leading Yuki to offer him the shelter of her adorably pink cat-eared umbrella. Or maybe something would fall from the pocket of Yuki's hoodie and Hayato would pick it up, calling to her, "Hey, you dropped this!" Maybe they'd flirt, but it's also possible they'd bicker. Either way, they'd be together by the end of the story.

This is not a rom-com, so you need not worry about reading onward if you’re one of those people who hates such sweetness.

If this were a cyber-thriller, there would be a hand-off as the pair pass close to one another. Hayato would slip Yuki a thumb drive containing all the passwords used by some nation's government or perhaps a small harddrive hosting a virus that would siphon money from all online transactions would trade hands.

This is not a cyber-thriller, which is good because I don’t understand computer systems sufficiently to go into details about high level hacking operations.

If it were a more violent type of tale, perhaps one destined to appear as a film directed by someone like Quentin Tarantino, Yuki would reveal that her umbrella handle doubles as a sword as she slices through Hayato.

This is not a violent story, either, so I'll be saved the discomfort of having to describe the way Hayato's entrails would trail out into the puddle of rain at his feet.

No, this is a science fiction story.

Yuki is a teenaged girl from a perfectly normal suburb of Tokyo. She ascribes to kuwaii aesthetics, does well in chemistry class although she struggles with physics, and is thinking of nothing more important than what form of snack she will eat when she gets home as she approaches and then passes by Hayato. She notices him, but nothing about him seems out of place or even particularly interesting to her, so unless something else happens, she will have forgotten about him before she reaches the end of the block.

Hayato pays more attention to Yuki. He's intrigued by the cat ears on her umbrella and the adorable animal her sweatshirt. He wonders what sort of animal it is, but hasn't been on Earth long enough to have a good guess or to even know what a panda is if we were to identify the creature for him. His fledgling understanding of humanity tells him, accurately, that Yuki is a kindred-spirit to his sister back on Ilon. Hayato has never understood his sister, so clearly he has no chance at understanding Yuki. His job on Earth isn't learning to understand the humans though; he's here to… Honestly, he's not certain. He's here because he received orders telling him to be here and he is very much into following orders at all times without asking silly questions like, "But why?"

It's really too bad this isn't a romantic comedy, because I feel poor uptight Hayato could learn a lot from forming a romantic bond with someone who doesn't take everything quite so seriously. But, alas, he passed by Yuki without any form of interaction occurring. They're heading in opposite directions and probably won't be seeing each other again.

Hayato continues around a corner, now unable to see Yuki even if he turned around to look for her, which he has no reason to do. At least not until the explosion.

He spins as the sound blasts down the street. Putting various details of the sound together tells him that what he's hearing is a blaster popular with a race of aliens known as the Han-el. The Han-el don't get along very well with Hayato's species and there are elaborate treaties in place that are supposed to keep the two peoples from every being on the same planet. Earth is well within the boundary of planets assigned to the Iloni, so what are the Han-el doing here? He wonders if maybe that's why his superiors sent him to Earth. Maybe they know the dratted Han-el are up to something.

Hayato, knowing nothing about his commanding officer's daughter's crush, rushes forward, bent on defending Iloni interests and explaining to the Han-el, forcibly if necessary, that Earth is in Iloni territory.

Meanwhile, Yuki has already forgotten about Hayato, but also noticed the not-so-subtle explosion behind her. She also turned, recognizing that an alien weapon was just used and that she needs to go explain, forcibly if necessary, that Earth is sovereign territory and aliens can't just go around blowing up parts of it. She’s already had to do this three times this month and is getting a little tired of it.

Yuki's fingers reach for the golden cat necklace she wears around her neck and she whispers magic words known only to her and her fellow chosen catgirls. Within three heartbeats, she transforms into a human-sized tabby cat and lets out a magic-laden hiss.

The pair close in on the Han-el, who looks a little sick over the fact that he's being closed in on. He had merely meant to flex his muscles, so to speak, for a merchant who was giving him a hard time, and hadn't expected any blow back from it.

The merchant comes out of her shop holding a baseball bat. The old woman glares at the Han-el, accusing him of blowing a hole through her wall and demanding to know how he is going to pay for repairs.

The Han-el looks at the old woman, who seems much more fierce than she did when he decided to mess with her. He doesn't look long though, because a blast of Yuki's magic slams into him while he's gawking and knocks him to the ground.

The Han-el struggles to get up, but realizes he has nowhere to run. He can smell that Hayato is an Iloni but decides that's probably the safest direction to go. He's wrong about that. The safest way to go is into the shop, because once he's dodged the unexpectedly badass shopkeeper it's a straight line for the rear exit of the place. But he doesn't know about the backdoor, so he makes the mistake of sprinting towards Hayato.

I haven't mentioned it before because it wasn't relevant until now, but Hayato has received extensive training on capturing fugitives, so he has the Han-el disarmed and on the ground in… well, not a heartbeat. But not much longer than a heartbeat.

Yuki comes up behind him, still in feline form, and delivers a lecture to the fallen Han-el about how he, and all other aliens, need to get off of Earth. At some point, the Han-el protests that's she's singling him out and informs her that Hayato is also an alien. So then she lectures them both.

Hayato protests, naturally. Earth is in his planet's region of influence and he is under orders to be here. While Yuki is yelling at him about how Earth doesn't concede to Iloni authority, the Han-el sneaks off.

The argument ends when Yuki's phone makes a noise and she realizes that her mother has been texting her to bring dinner home for the last five minutes. Instantly, she returns to her human form to type back, contorting her body to keep the driving rain off of her phone screen, that she is on her way to the store now. Yuki tells Hayato that he must leave the planet immediately, but does nothing to enforce this before rushing away to purchase enough sushi for her family of five. This will require quite a bit of sushi as even though the twins are only six, they eat massive amounts of food.

Hayato shakes his head at the retreating catgirl. He picks up his umbrella and holds it over his head as he moves on, even though he's been without its protection for a rather long while and is consequently soaked to the bone already.

If this were a romantic comedy, Hayato might think of the girl he just met as he makes his way back to his new apartment and ponder why it was that he found her dripping hair somehow… attractive? In a cute sort of way... He might regret that he is going to upset her by staying on Earth, but he won't feel he has any choice in the matter. Then the pair will meet again in a week or so. Yuki will act like she's angry he's still on the planet, but will be secretly charmed by him.

But it's not a romantic comedy. Right? So that’s probably not going to happen.

Above image is "Miss" by Wang Ling, who posts on Deviant Art as wlop.

The image was offered as a prompt on my writing prompt project Wording Wednesday, more information about which may be found at https://wordingwednesday.blogspot.com/
Posted by Andy Brokaw at 12:48 PM