The Comfort of Dragons 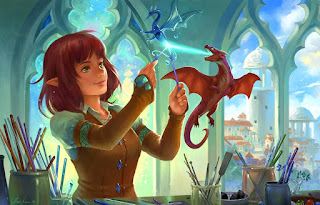 Farla guided Shyler’s magic in the glass dragon the pair were crafting and smiled at how enthusiastic her partner was about this project. This was the thirteenth dragon and Shyler’s joy over creating smaller replicas of herself had yet to dim. Starting their next project might well lead to a pouting dragon, but creating this mobile for Farla’s niece had been a lot of fun.

After waiting for the crystalline dragon to cool, Farla tucked it carefully into a padded bag with two others and left the studio with Shyler perched proudly on her shoulder. The pair received varying reactions on their journey. Those of the neighborhood who knew them offered waves and cheerful greetings, but strangers shied away. A few people even crossed the street. It was hard to be sure if they were prejudiced against Farla’s elven ears or Shyler’s red hue. Elves tend to be stronger with magic than human channelers, which makes some humans nervous, while red dragons have a completely unearned reputation for aggression. And, of course, there had been a rising sentiment against using magic at all lately.

People who knew Farla and Shyler recognized two of the most highly regarded artists in the nation and remembered how much of their income Farla spent on helping local families. The driver of the city bus the pair caught knew them well enough to shake his head at the couple who got up and moved to a further seat after she sat down near them. He made sure to use both her and Shyler’s names when wishing them well as they disembarked.

Upon reaching her sister’s house, Farla took a deep breath. Her sister was out of town, as was her husband and their six-year-old. The house was being watched by Farla’s brother-in-law’s sister. The sister, Elise, had soft grey eyes, warm brown hair, a gentle smile, a stately figure, and a deeply rooted sentiment against magic-channelers, all of which she’d inherited from her mother. Farla and Elise had known each other for close to a decade, and had a few interesting conversations early on. Then the conversations dried up, leaving only some glances that Farla struggled not to read much into from across rooms and dining tables. It had been two years since Elise did anything other than ignore Farla as much as possible.

When Elise opened the door, Farla expected her to stand aside without a word before going to read in the study as she had done every other time. She did not expect Elise to follow her into Katchya’s room and watch her bring out the final three dragon sculptures.

“These are the last ones?” Elise whispered, sounding scared. Her gaze was locked on the floor tiles beneath her feet.

“Yep.” Farla put extra pep into her voice, trying to pretend that she wasn’t unsettled by the change in routine. Shyler flew up to sit atop a bookshelf along with an assortment of plush animals but watched Elise with open distrust. “Once I attach them, I can hoist this baby up and it’ll be all ready to surprise the birthday girl when she gets home next week.”

Elise’s eyes moved to the ceiling, where the hook for the mobile was already installed. “I wonder how long it will take her to notice.”

The thought of their niece entering the room and going about her normal business before suddenly going, “When did that get there?” made Farla chuckle. “She’ll either see it immediately, or not until she gets into bed.”

“Agreed.” As though mentioning the bed had reminded Elise it existed, she sat down on it as she watched Farla deftly attach the new dragons. Each of the glass reptiles was a different color, which would work perfectly since Katchya’s room already looked like a rainbow had exploded across it. “Um…” Elise said after several minutes. “I don’t want to sound rude. But… Are they enchanted?”

Farla’s fingers paused and she looked up. Her eyes met Elise’s and she processed what she saw there. The other woman was openly concerned. It would have made some channelers angry, but Farla figured it was a mixture of possessing ignorance and honestly caring about a little girl they both adored. She could never be angry at someone wanting to protect her beloved niece. “I couldn’t love Katchya more if she were my own daughter. The only magic in these guys was from their formation and a mild spell to make it harder to shatter them.”

Elise’s lips pressed together for a moment before she nodded. Then she licked them as Farla tried to think about something other than Elise’s lips.

Farla went back to double-checking the attachments on the mobile, making extra certain that the metallic chains the dragons were to hang from were secure. Satisfied, she waved Shyler over. “Time to get this up!”

“Wait!” Elise sprang to her feet.

Shyler hissed at the sudden sound and flew to hide behind a curtain. Elise stared at the lump the dragon formed behind the curtain fabric as Farla waited for an explanation. Eventually, she gave up on that and said, a little testily, “I already told you I didn’t cast any big scary spells on it.”

“Oh.” Elise blinked a few times before meeting Farla’s gaze. Her eyes dipped as though she was cowed by what she saw. “That’s not what I meant. I meant to say, please hold on for a moment because I wanted to ask if you could add an extra enchantment.”

Her head tilted as Farla studied the other woman. “I thought you hated magic.”

“No… Not really.” A hint of tears clouded Elise’s eyes as she continued to study the floor. “That’s… I was raised that way. And my husband, he feels that way…” Her voice trembled as she spoke, but when she looked up her eyes were filled with anger. “But I’m sick of shutting up and ignoring my own opinions just because he ignores them. I’m leaving him. Or I want to. But when I told him that I wasn’t going to come back from this trip, he threatened Katchya.”

As Elise crumbled, collapsing onto the mattress and burying her face in her hands, Farla breathed in and tried to still a growing rage. The bed creaked as she sat and put a tentative arm around Elise. “Have you told Ethaniel?”

“Do you think I told Ethaniel?” Elise asked with a bitter laugh. “Is he on holiday with Katchya and Yvonne or in jail for murdering his brother-in-law?”

“Yeah, alright, I see your point.” Farla’s hand rubbed against Elise’s shoulder in a way she hoped was comforting as her anger turned to resolve and her thoughts shifted to planning. Shylar, reading the change in her partner’s emotions, emerged from the curtain at ground level and took a few hesitant steps towards the pair of elves. She stopped a ways shy of them and watched closely as she sent a sense of support to her partner. “I can enchant the mobile easily enough. But I think maybe you need something too. And we’ll need to put a charm on Katchya to protect her when she’s not in her room. Everyone already knows I made her the mobile, so we’ll need a piece of jewelry we can say is from you.”

Elise nodded. Her expression was numb and her voice toneless as she answered, “Of course. Just tell me what to buy.”

“I have some rainbow stone back at my place. It’s good for holding enchantments. Especially if you wrap it in gold. I have a little bit of that too. So we just need a chain.”

Farla’s chest felt tight as she gave Elise a squeeze and stood up. “You don’t have to stay for this part if you don’t want to.”

Elise looked up slowly. “I want to stay if that’s alright. I’m curious.”

Farla quirked her eyebrows. “So you really don’t think you’ll be damned by being around someone misusing God’s power?”

“No.” Elise shook her head and let out a soft sigh. “You couldn’t do evil if you tried, Farla. You’re the kindest, most godly person I know.”

Her lips parted as Farla replayed the words in her head. She had no idea how to respond to them.

“I’m sorry I let you think I hated you,” Elise went on. “I… I just couldn’t let Aris know I didn’t. If he had any idea how I actually feel about you… He wouldn’t handle it well.”

“How you actually feel?”

The softest of smiles graced Elise’s face. “Don’t get distracted. I’ll tell you all about it after we make sure the niblet’s safe.”

“Okay,” Farla all but squeaked. Could Elise be saying what Farla so desperately wanted her to be saying? No… Probably not. She probably just meant she wanted to be friends, right? Farla told herself not to let her hopes get too high and that now wasn’t the time for fantasies.

Early the next week, Katchya ran into her room and spotted the change right away. “Everybody!” she yelled. “There are dragons in my room!”

Laughing, the adults walked down the hall to admire the project. Her mom and dad looked up, making sounds of astonishment while her aunts smiled at each other.

Katchya put a hand on her hip. “Was this you, Aunt Farla?”

“Why would you think that?” Farla asked with a grin. On her shoulder, Shyler clicked merrily in the dragon equivalent of laughter.

“It was,” Katchya said to the others before running back to stand under the mobile. She lay on the floor so she could get a better view. “They’re so pretty.”

“So you like dragons?” Elise asked in a teasing voice. “I didn’t know that, Niblet.”

“Everyone knows that,” Katchya said.

“Okay, fine. I knew. That’s probably why I bought this.”

“Bought what?” Katchya bounced up again and looked eagerly at the package her other aunt held out to her. She grabbed the present and ripped the paper off it with excited efficiency. More gently, she took the lid from the box thus revealed. Her eyes went wide at the sight of a gold dragon clutching a rainbow-colored crystal to its chest. She squealed. “I love it!”

“Good,” said Elise. “I never want to see you without it.”

“You only see me on holidays,” Katchya said. “But I’ll wear it everyday.”

“Alright.” Elise smiled as Yvonne helped her daughter secure the clasp of the new necklace. “You’ll be seeing me more often than that from now on though.”

Ethaniel gave his sister a curious look. “She will?”

Everyone paused for a moment, then Yvonne blurted, “Thank God,” as Ethaniel said, “About time.”

“And…” Elise reached out for Farla’s hand. “And I’m moving in with Farla.”

There was another pause, during which Yvonne and Ethaniel shared a smile.

“Awesome!” proclaimed Katchya. “This is the best birthday ever!”

Above image is by deviant art user Sandara. I urge you to check out her feed at https://www.deviantart.com/sandara and considering purchasing some of the works she has for sale. (A list which includes this imagine.)

It was offered as prompt on my Wording Wednesday Project
Posted by Andy Brokaw at 4:54 PM