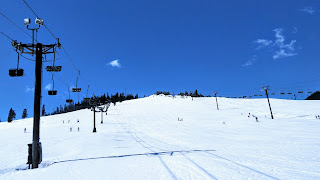 The following isn't fiction. It's not even really narrative nonfiction. It's just a little essay about what I did last weekend and what I saw when I left my house during a pandemic. I'm writing it largely to get it out of my head, but feel free to read it anyway. :)

For background, I live in Western Washington State. You know, where the COVID-19 pandemic first set foot in the US. By Saturday morning our social gathering buildings (restaurants, pubs, theaters, etc) had been closed for five days. It felt like longer. We were still being told we could go outside, though, so long as we did it without getting within six feet of people we don't live with. This was one of the first warm sunny days of the year, which would normally mean people were pushing towards outdoor activities, and with everything indoors cancelled, I knew that push was going to be strong.

I left my house for the first time in weeks. (Months? Years? Or maybe only days. My perception of time flow was seriously off and had been since the COVID-19 virus made it my state.) The first time since before the social places closed, certainly. My companions both lived with me; it had been a while since I saw someone who didn't.

We got to the state highway that runs through our town at around nine in the morning. Traffic seemed normal. I was on my way to ski even thought the lifts weren't running, but what was everyone else doing? I had no idea.

We passed by a small stocked lake. Its parking lot was completely full and there were more boats on it than I'd ever witnesses before. I hoped everyone had kept their distance while waiting their turn for the single boat launch.

We made it to I-5. Traffic seemed a little light, but not alarmingly so. Until we got to Everett. Everett is normally where traffic starts to be headache inducing, but there were no more people there than there had been back before the interstate went from two lanes each way to four. In fact, it seemed like maybe there were fewer. Several cars passed us doing about 100mph like they thought traffic laws had been suspended, but we soon starting see speed patrols. The whole thing was rather surreal.

Driving along, you can clearly see several stores from the road. The sporting goods place was packed like it was Christmas. Home Depot looked pretty typical for mid-morning Saturday. And Walmart? I don't think I've ever seen a Walmart parking lot that empty, certainly not on a weekend. I wondered if this was a Washingtonians being all about outdoor activities thing or something happening nationally. I wondered how the people in the sporting goods store could possibly be keeping proper distance from one another.

The lack of traffic remained until I-90, where it went back to what I'd expect for the time of day on a Saturday. I assumed most of these people were going hiking and the overflowing parking lots I glimpsed from the interstate bore that up, as did the decrease in traffic by the summit of Snoqualmie Pass. I could only hope people were staying far enough apart near the trailheads.

At the Snoqualmie Ski Area, things were an odd level of active. There weren't nearly as many people as there would have been if the lifts were turning, but there were many more than tend to show up in the weeks after the lifts stop in a typical year. (The above photo is one I took before heading up the slope.) We certainly had no trouble staying far away from other groups while skiing.

I had expected to see many more people just playing in the snow than were actually there. I only saw a few families with sleds. Nearly everyone there was hiking or skinning up the slopes to ski or snowboard. This helped with the whole stay-far-from-each-other thing.

We drove by our land and observed that the parking lot at that ski base was much more full than the one at the base area we went to. Possibly because this is where the Nordic trails are, but also possibly because Hyak has some greens you can hike up and ski down blacks, so it's really the easiest area for touring or bootpacking. Again, people seemed to be getting out of their cars and spreading out, so it seemed that despite the number of cars around people were still doing a decent job of trying to prevent the spread of the virus.

Over the course of the day, I used three separate DOT bathrooms. Sitting in the car at the ones on I-5, we observed that most of the other people there looked old enough they might should be more worried about COVID-19 than they seemed to be. And they did not look like they were trying to do something outdoorsy. I don't know what they were doing. I stayed as far away from them as I could. At the stop on I-90, it seemed to be mostly other outdoorsy people, but I stayed away from them too, even when put in the odd position of having to wait for a sink even though there had been a ton of open stalls. I assume that, like me, other people are now spending much more time washing their hands than usual. I hadn't expected that to be one of the markers of the End of the World. No one ever washes their hands in zombie movies.

What I didn't all day see were airplanes. It was really weird. No planes, no chemtrails. The skies hadn't been so clear of traffic since September, 2001. I'm really not sure why. Maybe the recreational airports closed. Maybe very few people live with their usual copilots. I don't know.

We crossed a bridge on the way home. Typically, it has walkways on both sides of the vehicular traffic, but they've closed one of them for bridge maintenance. This meant that groups of people were shuffling by each other in a space that's maybe a meter wide. It's a long bridge, so there were each passing by several other groups doing this. I saw that and thought we needed to close the bridge to pedestrians ASAP. Because apparently people couldn't look at it and say, "Gee, maybe today isn't a good time to walk across this bridge." It's in the middle of nowhere, so it's not like they were actually traveling on foot; they were just being tourists.

When we got home, I learned that some of the larger and better known parks in the area had closed down their more popular access points because they were too crowded. I wasn't surprised.

That was three days ago. Since then my state governor has asked us to stay at home unless doing essential things. Exercise is considered essential, but I'm thinking I'm not going to be going skiing again for a while because even if I'm allowed to I can't really justify using the DOT restrooms. (And not using them isn't an option at the distance I currently live.) There are closer places to exercise. Granted, I'm allergic to what's outside my house right now, but c'est le pandemic, n'est ce pas?

Thanks for letting me process all that. I don't really have a decent diary at the moment. Next time I post it will be a story, with an actual plot and everything. Stay tuned! 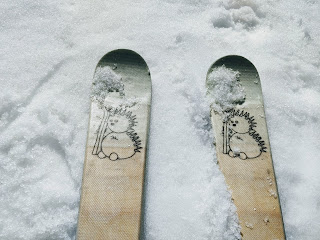