Into the Misty Dark

Note: This piece originally appeared on my LiveJournal way back in 2010. 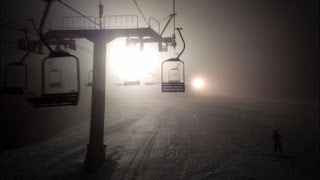 The chair rushed up behind us, faster by far than the ones on the lift we came off of. My son faltered, thrown off by the speed. The attendant pressed the stop button. The men behind us groaned.

We sat on the chair, which stayed put well past the point I was embarrassed and the kid was bored. Slowly, it started up again.

My son tapped his ski poles against his legs, nervous or impatient, I couldn't tell which.

We climbed through the loose fog we were already used to from the last run. Up over the race course the skiers behind us were anxious to get back to. Up past the top of the lift I would have rather taken had it been running that night. Up into thicker fog.

The fog kept getting more dense. I could see the chair in front of us, but not past it.

"This is taking forever," my son said.

"Lift rides always seem too long in the fog. It's the lack of visibility.” But inside I was thinking he was right, that we had been on the lift too long. And the lift was so much faster than I'd expected... What if it was the wrong one? What if I was confusing it with a lift at one of the other ski areas and I'd just put us on something going too far up the mountain, something leading to runs we couldn't handle?

I smiled and tried not to look worried. “Yeah, it is.”

It was getting spookier too. The higher we went, the less well-lit everything was. I had no idea where we were going. The slope under us could be anywhere, all I could see of it was a tiny sliver. It was steep, too steep. But wide. Maybe. It was supposed to be. We should be able to cut across rather than go straight down, giving us a harder run than the one we were bored with while still being well in Eric's comfort zone. If this was the right slope.

“Are you sure we're on the right lift?” Eric asked.

“Mom, is this the wrong lift?”

“I'm not sure.” I put an arm around his shoulders and pointed at the ground. “But see the way the slope goes across? There's nothing between here and the last slope we were on, so we can cut back no problem.”

The fog grew heavier. I could barely make out the chair in front of me. Then we sailed past the last light. I touched my jacket, feeling the bump from the headlamp I'd taken from the car just in case. Still there. Good.

Finally, the end came into view and my son gave a cheerful, “Tips up!”

When we unloaded, there was a map board barely visible through the fog and dark. But when we skied up it it, we found the map itself was completely unreadable. Damn. I could read the signs pointing to different slopes, but none of the names meant anything to me. Double damn.

The racers swept past behind us. I watched where they went, knowing I didn't want to go that way. Far to the right of them was a welcome sign.

“Easiest way down,” I read, pointing out the sign to my son. If we were where we were supposed to be, the easiest way down was a very easy intermediate slope, more of an advanced beginner slope. If we weren't where we were supposed to be, and I honestly couldn't tell... Well, it couldn't be harder than the race course and we'd both done harder slopes than that, just not while people were racing and we couldn't see anything. “All we have to do is follow the signs until we can cut back to where we were.”

Ninety percent of the lift traffic went to the race course, so we were able to hobble down the easy way without worrying about other skiers at all. We skied into the light and I saw trees that I was almost sure were ones I knew. Almost. It really was hard to tell since I'd never been there in either fog or darkness before.

The fog got heavier, but we didn't panic. It was part of our adventure.

The above story is a piece of narrative nonfiction about a dark and foggy night on a ski slope. It was ten years ago. The little kid with me, the one who was worried I'd gotten him onto a slope that was too hard, is now an adult and a professional ski instructor who can do that run backwards. Meanwhile, I've gotten older and less willing to try things in the dark due to failing vision. C'est le vie.

The photograph was grabbed from a YouTube video collecting a series of night lift in the fog shots. (https://youtu.be/jxLYocI3ipY) It shows more visibility than we had, but it was the closest thing I could find in the time I gave myself to search.
Posted by Andy Brokaw at 3:19 PM