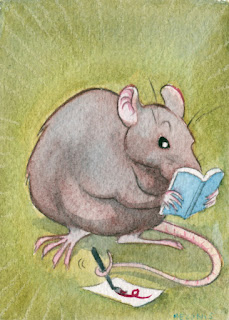 In the early twentieth century, there lived a pair of completely mundane people named Campbell. The Campbells liked to joke that since they had no human children, they passed all of their qualities on to their pets. They had an iguana name Samanatha who they taught to do arithmetic. She could easily add and subtract single digit numbers, indicating the answers by flicks of her tongue, although her communication broke down when the numbers got too high and an equation with a negative answer would make her emit a high-pitched whine guaranteed to cause migraines in all who heard it. Samantha never gained much reknown, possibly because as an iguana she simply wasn’t considered cute enough.

It was with Priscilla that the Campbells had the most success gaining notice. Unlike poor Samantha, Priscilla was considered cute by many, although she caused others to scream and flinch. Priscilla, you see, was a rat, and while rats do cause some people to become squeamish, they have a large fan base.

Priscilla started her artistic career as most artists do, by bucking against the idea that they need to copy the art of others. Although she lacked the words to express her frustration, it was very clear that she saw no need to repaint the scenes in the books of classic artwork she was given. That’s why, the Campbells decided, her version of the Mona Lisa looked more like an abstract construction of the Chineese word for squirrel than a secretive human woman and her impression of Dali was nothing but a bunch of loops. This could have been disastrous had Mrs Campbell not had an innate understanding of marketing and been able to convince people that these were actually deep commentary on the original subject matter. It soon became all the fashion to invite Priscilla to your party so that she could deconstruct famous artworks for your guests for sums of money that were really quite reasonable as the price was set assuming there would be a large amount of tipping, which there generally was.

Despite the steady income Priscilla had been providing, the Campbells were happy when they received an offer to purchase the rat outright. They had begun to worry that they had exhausted their social circle and its connections, and thus were they concerned that there might well be fewer bookings in future.

This is how Priscilla came to live with a man named Dmitri Marceou. Dmitri had no interest in parading Priscilla about for performances, for he didn’t care for people enough to attend more than about one gathering per decade. He also had no interest in her as an art critic.

Dmitri Marceou was a sorcerer, and as such he recognized the magic inherent in Priscilla’s works. What others saw as comments about art, or as random nonsense created by a rodent, if they were being more honest, Dmitri knew were actually sigils waiting to be fed magic. For example, had Priscilla’s stylistic recreating of the Chinese pictograph for squirrel been fed a moderate amount of magical energy, it would have summoned the subject of the Mona Lisa. Not the painting, but the actual woman who sat for it. In the case of that particular painting, it would have been entertaining. But I’m certain you can see why a person in possession of sanity might hesitate to apply the same procedure to Picasso’s Guernica or to pretty much anything by Hieronymus Bosch.

Over the next year, Dmitri collected sigils for everything he thought might be useful to have the ability to summon, from still lifes of apples to portraits of great generals, from depictions of puppies to images of prostitutes. At one point, it even occurred to him to paint a picture of Priscilla that she could then paint a rendition of so that he could revive her after her death. Then, the next day, he realized he could recreate the Fountain of Youth so neither he nor his precious rat need grow old.

And why, you may be wondering, have you never heard of Dmitri Marceou? Surely a man with such abilities would be able to conquer the world?

The answer is simple: Dmitri is a smart man. This means that he is fully aware how much work conquering the world involves. It’s not just the taking things over that’s a problem, although it is a challenge. What happens once you own the world? Now you have to run it, all the while protecting yourself from the people who would remove you from power if given half a chance. Isn’t it better not to bother? To live life in comfort and at ease with no one realizing you’re anything other than a person who happens to be wealthy but otherwise isn’t terribly interesting?

I will tell you a secret. You have seen Dmitri. He’s not called that now, and no one realizes how old he truly is, for as we’ve established he has access to the Fountain of Youth. He allows himself to age sometimes when he’s enjoying a certain life, then will bathe himself young again and create a new identity when he’s bored. His current identity is quite well known, although I would never betray his trust to the degree of telling you what name he wears. If nothing else, it would cost me my job, if not my life.

As for Priscilla, Dmitri never forgets to splash her with rejuvenating water every few months so that he will not have to resort to summoning an earlier version of her. Rats are quite companionable creatures and the pair have bonded over the time they have been together so that now it would wound Dmitri considerably to lose his furry companion. When he first purchased her, Dmitri did see Priscilla as a tool, but she quickly became a pet and is now more like a child. She is, in fact, quite possibly the most pampered rat on the planet.

Though I myself am not a sorcerer, I have tried to teach many other creatures, including other rats, to paint sigils. I have yet to have any success in the matter and can only speculate as to what it was that instilled the ability in Priscilla. Perhaps there are other creatures with the talent helping other sorcerers, unbeknownst to me. A part of me hopes there is, while the rest is happy to think that darling Priscilla is unique. Either way, she is a very good rat and I am honored to be allowed to clean her cage.

The above image was painted by Dylan Meconis, who can be found on Flickr as Quirky Bird at https://www.flickr.com/photos/quirkybird/

It was given as a writing prompt by my Wording Wednesday project. Other responses can be found in the comments on that site.
Posted by Andy Brokaw at 9:05 PM