Along Came a Spider and Sipped Tea Beside Her 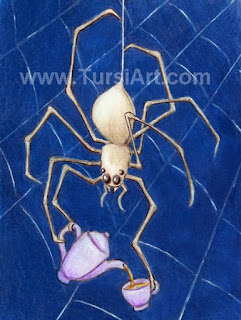 When a person sees a picture of a spider pouring tea, most folks will assume that the tea pot is very small and the spider is “regular” size. Humans in general just don’t want to look at the image and assume the teapot is what is standard, because this would make for a spider of alarmingly large proportions. That’s what I assumed when I saw the sign outside the tea shop I just walked into.

While in school, I was told that giant spiders were impossible due to the weight of their exoskeletons. I remind myself of this while staring at the sight in front of me. Clearly, what looks like a spider with a body the size of a Great Dane must be something else. A robot maybe? But everything about the spider seems so... organic.

“It’s called Victorian Rose,” the spider says, talking about the tea she just offered me in a posh and melodic voice. I’m assuming she uses female pronouns due to the sound of her voice, but maybe that’s prejudiced of me. For all I know, the voice I’m hearing is deep for a spider. Or maybe it’s the male spiders with the high voices. It seems really inappropriate to ask. “It’s a black tea blend with bergamot, like an Earl Grey, but I’ve added rose and lavender. It’s really quite lovely.”

“Yes, please?” My mother taught me to be polite and refusal seems like it would be rude. I walked into a tea shop advertising free samples, so clearly society would expect me to accept one barring some valid reason to decline, such as an allergy to one of the ingredients. Citing the species of the person doing the pouring of the tea as a reason to decline seems tacky at best. Mama didn’t raise me to be tacky.

The spider makes a brief, happy-sounding hum as she pours. “It’s probably my favorite of our black teas. I’m a sucker for roses.”

I nod. It’s possible that I’m terrified. That would explain the complete numbness that’s wrapped itself around me. “Yes. Rose petals are very nice in teas.”

“My name is Jan,” the spider says conversationally as she holds out a delicate porcelain tea cup from which emits an aroma I must admit is rather appealing. For a moment, I think that the name confirms this is a female spider, but then I remember that the name Jan can be given to boys in some parts of the world. The human world. Our rules may not apply to giant spiders anyway.

Under the theory that running away from scary things is seldom the best option, I take the tea cup rather than fleeing in terror and give it a long sniff. As promised, there are notes of rose, lavender, and bergamot. If it was being offered to me by anyone other than a gigantic arachnid, I’d be really excited about it rather than somewhat ambivalent. Is that racist of me? It may be. Best to sip the tea before it becomes obvious that I’m nervous about drinking it. Jan lifts a second cup from a nearby shelf and pours herself a cup, which she begins to drink while I’m still pretending to take in the scent.

My first sip is small, but that probably doesn’t seem odd. Most people take small tastes of hot things, yes? The taste matches the aroma well. It’s floral and a little dainty, with an unexpected hint of smoke. “Is there lapsang souchong in the blend?” I ask, suddenly more intrigued than uneasy.

“Good job!” Jan claps with two of the hands that aren’t busy either holding the tea or keeping her upright. It’s more than a bit disconcerting, but holds a slight hint of silliness that helps me relax a little more. “I was inspired by the idea of Victorian London. You know that fog they were famous for was smoke, right? So I thought surely I needed a spark of smokiness!”

“If you like smoky teas, you might also like our Witches’ Pyre blend. It’s both woodsy and smoky. Some people say its name is in bad taste, of course, but as I was cursed to this form by a witch, I’m actually more okay than I probably should be with the idea of burning them.”

“Oh.” I’m really not sure what one is supposed to say to a declaration like that. “Woodsy and smoky sounds good.”

She nods, which moves most of her body. “We used to call it Campfire, back in the precurse days.”

With a small sound to indicate that I’d heard her, I struggle to decide if I want to ask about the curse. She kind of seems to want me to. I shift my weight as I hold the tea cup with both hands and take another sip.

“If you’re wondering what I did to be cursed, it wasn’t anything bad,” Jan says. “All I said was that I could really use some extra hands. I think the witch might actually have thought she was doing me a favor.”

“Wow.” I blink. “Yeah, I’ve said that loads of time, but I didn’t mean that I wanted to be a spider. I just meant that sometimes it’s hard to juggle stuff.”

“I know, right? Some people just take things way too literally, I suppose.”

As the last of the tea slips down my throat, I finally motivate myself to look around the shop. It looks like a perfectly normal tea shop with shelves of jars lining the walls along with the occasional display of a tea pot, cups, or infuser. I’ve been in dozens like it, although never before have I a met a shopkeeper with eight arms. “I suppose it could have been worse,” I say.

“She could have made you an octopus. Then you’d have to live in water and wouldn’t be able to make tea.”

A loud clicking fills the room. I think it’s a laugh, because when Jan speaks again, she sounds amused. “I’ve never looked at it like that. I guess you’re right.”

Behind me, the door opens. Someone lets out a scream and I hear feet running before the door closes again.

Jan sighs. “That happens so often. I usually don’t man the floor for that very reason. But one of my sales team just quit and no one else could fill the shift.”

“Really?” I smile. “Not to show joy at your misfortune, but my son just started school and I’ve been thinking I’d like a parttime job.”

Without eyelids, it’s impossible for Jan’s eyes to widen. They do seem to get brighter though. “I can start you at fifteen an hour. When can you start?”

I glance at my watch. “I have four hours before I have to be home…”

Above image is by Rose Tursi. I couldn't find this work on her website (it was on Pintrest) but you can get other things by her at www.tursiart.com

The image was offered as a prompt by my Wording Wednesday Project. You can find the post and some other responses to it at https://wordingwednesday.blogspot.com/2019/10/s3w2-and-creature-is-spider.html
Posted by Andy Brokaw at 11:35 AM