A Promotion in Hell 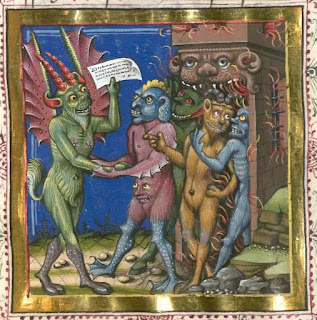 As Xed Dilman walks into the office of Hellpower Company’s Chief of Personnel, Mr Zarus smiles in a way that should make at least one of Dilman's heads nervous. Normally, the head in Dilman's stomach is quick to pick up on details, but for some reason he beams back at Mr Zarus without a hint of hesitation and it's Xed's upper head, the one on his shoulders, that shoots me a nervously inquisitive look as Vice President Mr Zarus grabs Xed’s hand and gushes, “Congratulations, Dilman!”

I bite down on the tip of my tail, which I just realize I've stuck in my mouth again. It's a really bad habit that I seriously need to break. The other day I read an article that suggested putting foul tasting substances on your nails to stop biting them and I'm thinking that would probably work for tails too. I just need to think of something that won't stain my white fur.

Alerted by the volume of Mr Zarus's voice, several of the office workers appear in the doorway to see what's going on as Xed's lower head thanks Mr Zarus without seeming to wonder what he's being congratulated for. Our coworkers' eyes go to the paper our boss is waving around as they likely wonder about that as Dilman isn't exactly the strongest member of the marketing team. A few of them look at me, knowing I would have typed it up the letter, and I try not to go be anything away with my expression.

Mr Zarus moves his smile to the creatures gathered outside his office. “Everyone congratulate Dilman! He’s just been promoted to Head of Human Resources!”

Our boss narrows his eyes on Xed’s upper head. “No need to curse. Your work here has more than proved you perfect for this job.”

I hold back a whimper by sticking my tail back between my lips. That was an incredibly mean thing to say, even for a hellbeast.

“This calls for a drink!” announces Martinez, in whose opinion pretty much everything in life necessitates an alcoholic beverage. He clops a chipper hand on Dilman’s shoulder and pulls him toward the exit. “Come on, dude. First round’s on me.”

Forcing my tail from my mouth, I wrap its tip around my left horn as I watch Dilman leave. I’ll see him again, when he comes back to fill out his travel authorization. After that… Well, the last Head of Human Resources lasted a good month on earth, but she was a great deal more capable than poor Xed has ever been.

The version of me from my high school years would have been disappointed at the way I sit at my desk and quietly turn to my computer to print out the forms the widower of the last Head of Human Resources is going to need to fill out in order to claim the company sponsored life insurance payout. College me would have dipped her head in shame. Those versions of me still believed saving the world was something a lone demon could achieve if she just tried hard enough. College me would have stood up, quite possibly on the desk rather than behind it, and said it’s ridiculous that we keep sending people to die in the human world. And for what? The chance to sign a few more souls? Aren’t there enough souls in hell already? Don’t humans do a good enough job of damning themselves without interference?

Why is it, college me would have demanded at the top of her lungs, that we all take it as a given that we need to keep increasing the number of damned humans in the universe? Sure, their agony powers our energy grid, but itsn’t it about time that cheaper alternatives were explored? The humans have tech almost as good as ours these days and they’re not burning souls to power it. And Heaven is still operating, even though they have fewer souls than ever these days. Couldn’t that indicate that human ecstacy may be a more powerful energy source than agony?

Personal Assistant me agrees with college and high school me, but lost the energy to complain about it years ago. Last time I mentioned the possibility of running things off positive emotions rather than pain, my ex-girlfriend had rolled her eyes and told me to watch less human entertainment. Apparently they had a film where monsters learned that a child’s laughter was a more powerful energy source than a child’s terror. I haven’t seen this movie, but I have to wonder if it was written by someone from Hell who shares my opinion.

I take the printout, shove it in an envelope, and address it to poor Herman. It’s tempting to go ahead and print out a second copy for Dilman’s wife while I have the file open, but there’s just enough optimism in me that I don’t do it. The new job may fundamentally be a death sentence, but a million things could theoretically happen to save him. They probably won’t, but they could. In a universe of infinite possibilities, something could keep Dilman’s infant daughter from loosing her daddy before she even gets to know him.

My finger hovers in front of my screen for a moment before I close the file. I take a deep breath as I rub my horn with my tail. This job is robbing me of my sense of self… My eyes go to Mr Zarus. He sits at his desk with the empty stare of someone who has logged into a virtual reality program.

Nodding in silence, I open a new terminal and create an account at jobseekers.hell. Maybe I can’t save the underworld, but I can at least find a job that doesn’t involve cheerfully helping good-hearted demons die young.

The above image is from a text by fifteenth century Italian lawyer and bishop Jacobus de Teramo. I haven't been able to find the name of the artist.

It was given as a writing prompt by my Wording Wednesday project. Other responses can be found in the comments on that site.
Posted by Andy Brokaw at 3:06 PM