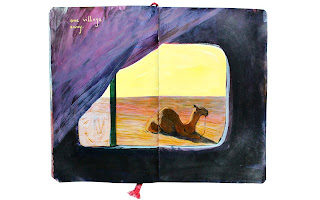 It is said, at least by t-shirts sold outside Ski Dubai, that camels don’t ski. Josef al Shameel, a camel technically owned by a minor noble in the United Arab Emirates but granted the freedom to roam about the desert on account of how he freaked his owner out, could only read Arabic. As the shirts were generally written in English, he didn’t know that they said he shouldn’t do the thing depicted. All he knew was that he’d seen a human wearing a picture of what was clearly a camel on flat planks of wood going down what Josef took to be a sand dune. He’d seen that and thought to himself, “That is a thing I want to do.”

In the history of the Ski Dubai indoor ski area, no camel has ever shown up and asked for a lift ticket. Josef didn’t either, possibly because he didn’t know what snow is and possibly because when he tried to find someone to design camel-sized skis for him, the human’s first thought was to contact a film crew because he’d discovered a talking camel. Sharif the Engineer got on the phone to his cousin Mustafa the Film Student posthaste.

The crew arrived in the early hours of the morning. It was mid-January, which is also mid-ski season, although determining when ski season is in an area that only sees a scattering of snow every decade or so is a challenge. They found Josef sitting by the roadside waiting for them.

After dispensing with greetings, during which the film crew professionals did their best not to blurt of things like, “Holy hellfire, a talking camel!” they moved on to the matter most important to Josef. “Where are my sliding planks?”

Mustafa, who most interested in fiction but willing to start out with a documentary, supplied him with a word in English. “Skis.” He then added in Arabic, “The planks are called skis. And they’re in the van.”

When the documentary hit the internet of the skiing and talking camel, the overwhelming response was for people to complain that they were sick of CGI animals. No matter how many interviews he gave, Mustafa was unable to convince the world that the whole thing hadn’t been faked. And Josef refused to give any more interviews after seeing some of the more hateful things being said about him on Twitter.

The story ends well though. Mustafa landed directing job for an Arabic reboot of Lost in Space featuring a CGI camel in the place of the robot, one of several projects he would undertake for Netflix. And while Josef never did learn what snow was, he can still be found still getting his turns in on the dunes of the UAE. If you look closely in the distance while traveling through some of the less populated parts of that nation, you just might see him.

The above image is an untitled travel piece by Missy Dunaway. Dunaway is releasing her graphic travel diaries soon. Details can be found at http://www.missydunaway.com/travel-journal
The prompt was offered by my Wording Wednesday Project.
Further inspiration came from my Ski Dubai "Camels Don't Ski" t-shirt. I would have taken a picture of it for you, but it appears to have gone into storage and I won't be able to get to it until next year sometime.