I have only the dimmest memories of the Before. There were tight spaces, dimly lit and kept too warm. There were boxes radiating the smell of cardboard and making my skin itch. There were other animals, but they kept to themselves. We were too scared to talk, too uncertain of our destinies.

The first human I remember moved me from a container and onto a shelf. I was stuffed in behind others like me, in the midst of a small army of terrified children.

One by one, my companions started to disappear. Mostly it was the ones before me, but occasionally, there would be a light and movement and a hand would snake through to take someone from the depths of our group.

Eventually, I was in the front row and able to look out at the world around my shelf. There were many other shelves running in long rows under flickering florescent lights. There were signs with numbers and names on them, but while I could read the signs under others, I could not see the one under me. I spent much time wondering what it could say.

Sometimes the lights went off and the building sat in silence, but most of the time, the lights shone and humans meandered by at irregular intervals. They came in two basic height groups, tall and short. The tall ones sometimes pushed carts and took from the shelves. Other times, they pushed carts and added to the stock.

The short ones never brought anyone to the shelves and seldom came unaccompanied. A few of them picked me up off the shelf. Some found me wanting and put me back, others where told they couldn't have me by the tall people with them. No one ever bothered to explain why I was being left, but as I didn't know whether things would be better off the shelf, I didn't really know if I wanted to be taken or not.

Then He arrived. He was short, with light brown hair and blue-gray eyes, and he smiled brightly when he saw me. He picked me up and I knew this was My Boy, the one I had been waiting for.

“You sure the panda's the one you want?” his mother asked, but I knew from the way she looked at me that she was certain I was going home with her.

He nodded and hugged me tightly to him.

They ran me through a scanner and took me out into a bright world filled with humans, cars, trees, blue skies, and all sorts of things I'd never imagined. And as they walked me through this new and amazing world, they gave me my name, Pong-Pong.

That's when my life started.


This post inspired and co-written by Pong-Pong the Panda. 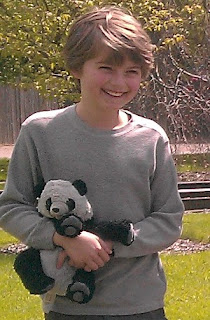